After trying to wrangle cross-platform battery testing and seeing how many variables can go into the tests, I've decided that the best we can say is battery life on X platform is better for Y task. So, I can say quite comfortably that playing 1080p MKV files using VLC, the XPS 13 gives you better battery life.
Comparison, online available, Very Short, Date: 02/09/2015

Featuring a better display, upgradable storage and an advanced Surface Pen digital stylus, the Surface Pro 3 is the winner of this vs review. However, having matched the Surface Pro 3 in performance and battery life, and featuring a more user-friendly laptop design, the MacBook Air definitely gave Microsoft's latest hybrid a run for its money and still is a significantly better choice for users more familiar with Apple's platform.
Comparison, online available, Short, Date: 08/13/2014

Even Apple's cheapest laptop is head and shoulders above most of its competitors, and in terms of build, battery life and usability the MacBook Air 11 is an all-round winner. It's also that most unusual of items: an Apple product which represents good value for money. That screen is really starting to show its age, though, so fingers crossed that Apple brings out an Air with Retina Display soon.
Single Review, online available, Short, Date: 06/28/2014
Rating: Total score: 80% display: 60% mobility: 80%
83% Apple's 11-inch MacBook Air laptop cuts price, boosts performance
Source: CNet

The 2014 MacBook Air, like the largely similar 2013 version, is all about battery life and portability. This 11-inch laptop, nearly the size of an iPad, now lasts almost as long as one, too. It could tip the balance in favor of the 11 for some. For others, though, an iPad plus keyboard might have replaced this already.
Single Review, online available, Long, Date: 06/27/2014
Rating: Total score: 83% performance: 80% mobility: 90%
Surface Pro 3 vs MacBook Air comparison: Microsoft's new tablet is impressive, but can it really replace your laptop?
Source: Macworld.co.uk

Overall, we take our hats off to Microsoft for its Surface Pro 3. It really does have specs that rival the MacBook Air and portability that brings it closer to competing tablets. But when it actually comes to using the Surface Pro 3 as a laptop, it's not the most comfortable of activities. We find the MacBook Air wonderful to work on for long periods of time, and with that lengthy battery life it's more suitable for full-day use.
Comparison, online available, Short, Date: 05/30/2014

This is a niche device, suitable for Apple users that need both portability and power. While it’s tempting to compare it to other Ultrabooks, it actually has a lot in common with the Surface Pro 2, which has very similar specs and is built for a very specific type of Windows user. For the platform agnostic looking for thin, light, and powerful, the MacBook Air is certainly worth considering. Its “acceptable” display and other drawbacks make it tough to outright recommend over any and all competition.
Single Review, online available, Medium, Date: 05/21/2014
Rating: Total score: 75%
100% 11in MacBook Air review, Apple's MacBook Air 2014 reviewed
Source: Macworld.co.uk

With its lower price the 2014 11in MacBook Air is a great purchase. If you want the lightest laptop available there is no need to sacrifice power - the 11in MacBook Air is just as good as the 13in model. Unfortunately in some areas this year's model isn't quite as good as last year's model - the flash storage seems to be slower than it was in 2013. If you can get a discounted 11in 2013 MacBook Air from the Apple refurb store, it is still be worth considering as an alternative to the 2014 Mac Air model.
Single Review, online available, Medium, Date: 05/15/2014
Rating: Total score: 100%
Review: 2014 MacBook Air (11-in)
Source: Gizmag

If you already own the mid-2013 MacBook Air, then there's really no reason to consider this new model. The speed differences are far too subtle for you to even consider upgrading. And if you can find last year's model on the cheap, then I'd also recommend going that route. Save the money, and enjoy your shiny new 99 percent as good as this year's model MacBook Air.
Single Review, online available, Short, Date: 05/15/2014

Look no further than the latest Apple MacBook Air if elegance, premium feel and functionality are your list. The 11 inch, MacBook Air MD711LLB comes with the 4th generation Intel Core i5 dual-core clocked at 1.4 GHz with Turbo Boost of up to 2.7 GHz. The screen is an 11.6 inch LED-backlit panel which makes viewing on the device a joy. It also comes with 4 GB LPDDR3 1600MHz RAM and Intel HD Graphics 5000 which makes the lightweight MacBook very much capable for everyday tasks.

As expected from Apple devices, the user interface is great. The Air features 128 GB flash memory storage and OS X Mavericks. In a good way, the design is similar to all previous versions with an all-aluminium chassis. Other hardware includes Thunderbolt digital video output, 20p FaceTime HD camera, 802.11 ac Wi-Fi and dual microphone.

The keyboard sports full-size backlit keys and an ambient light sensor. The most notable aspect of the Apple MacBook Air 11 inch 2014-06 MD711LLB is the battery life with up to 9 hours wireless web usage and 30 days standby time.

Series: The original MacBook Air, “the world’s thinnest notebook” was introduced at the 2008 keynote by Apple’s former CEO Steve Jobs. Key advantages are thinness, durability, high quality display especially the input device when compare with other netbook at the time. However, it was also heavily criticized for lack of Optical Disc, only one USB port, not user-removable battery among other things. At that time, nobody knows that these disadvantages of the MacBook Air series would be the pinnacle of Intel’s concept for next generation notebooks which will be the newest trend for 2012.

In 2011, Apple has introduced the latest update of the MacBook Air Series, with Intel’s latest Sandy Bridge Series, which doubling the performance. Major advantages of the 2011 MacBook Air in our reviews are the light weight, outstanding, unrivalled design and robust build quality thanks to the aluminum case, very good backlit keyboard plus glass track pad, as well as a very good performance for a subnotebook. The 2011 MacBook Air still shares some of the original’s disadvantages like limited ports, heavily reflective display, non-upgradeable memory and non-user-removable battery. Still, the MacBook Air outclasses almost every other Ultrabook out there with its advantage, save only for Samsung’s newest Series 9 model. On average, the review-ratings are very good, which always assure a place in the top 3 Subnotebook of Notebookcheck.

Rumor has it that Apple will introduce the new MacBook Air within a month during Apple’s usual WWDC with Retina-display, USB 3.0 and Ivy-bridge processor, so stay tune for the newest update of the most popular Ultrabook from the tech giant in Cupertino.

4260U: Haswell-based ULV dual-core processor clocked at 1.4 GHz with Turbo Boost support up to 2.7 GHz. Offers an integrated HD Graphics 5000 and a dual-channel DDR3 memory controller.» Further information can be found in our Comparison of Mobile Processsors.

Apple: Apple Inc. is an American multinational corporation which designs and manufactures consumer electronics and software products. Apple software includes the Mac OS X operating system but nowadays Macbooks are also able to run Windows. Apple has at least sporadically been considered the most valuable company in the world since 2011 and has consistently ranked among the Top 10 companies in the world.

In the laptop sector, Apple's market share was 9.3% in 2014 and 10.3% in 2016. The latter corresponds to the 5th place. In the smartphone segment, Apple achieved 15.3% in the first quarter of 2016, which means a market share loss when compared to the 18.3% in same quarter of the previous year.
Nevertheless, Apple ranked second place behind Samsung in both years.

There are tons of reviews on Apple laptops, smartphones and tablets. The ratings are significantly above-average (as of 2016). 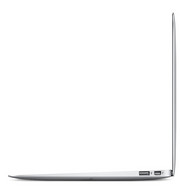