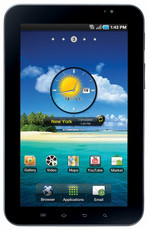 Reviews for the Samsung Galaxy Tab 7.7

The form and size of the Samsung Galaxy Tab 7.7 feels perfect for a device you can grab to take with you for a long trip, a meeting, or a trip to the ballpark. It isn't as unwieldy as a 10-inch tablet, but the tradeoff is the screen loses real estate previously devoted to input. As a result, it doesn't feel like a serious business device (unless you pair it with a keyboard) that you would want by your side through a busy day of meetings and projects.
Single Review, online available, Very Long, Date: 06/19/2012
Rating: Total score: 70%
Samsung Galaxy Tab 7.7″ 16GB Review
Source: T Break

If you’ve not yet splurged for a tablet of your own and you aren’t quite sure if the iPad is for you, then this tablet might just fill that little space in your heart. While it does suffer from some sluggishness due to Android 3.2, it’s still a gorgeous little tablet that is ultra-portable and gets the job done. While there are similar-sized Android tablets out already, the screen on the Tab 7.7 just has to be seen to be appreciated. While I don’t recommend using the call features of this tablet, it will work well for just about anything else you can throw at it.
Single Review, online available, Short, Date: 04/29/2012

On hardware alone, the Galaxy Tab 7.7 is the highest-quality tablet Samsung currently offers. The thin and light design is top-notch, battery life is incredible, and the Super AMOLED Plus screen is gorgeous, but it's held back by the rough-around-the-edges, outdated Honeycomb OS and a high off-contract price. The 10-inch Wi-Fi-only Asus Transformer Pad TF300 packs in the latest quad-core Nvidia processor and Android OS and manages an affordable sub-$400 price. Samsung's own Wi-Fi-only 7-inch Galaxy Tab 2 costs nearly a third of the price and comes with Ice Cream Sandwich on-board. If LTE connectivity is a major concern, you should consider a hotspot like the Verizon Jetpack ($49.99, 4.5 stars), and couple it with a less-expensive Wi-Fi-only tablet. The Galaxy Tab 7.7 is beautiful, but unless you really need Verizon LTE inside your tablet, it's simply too expensive.
Single Review, online available, Short, Date: 04/25/2012
Rating: Total score: 70%
83% Tablet showdown: Samsung Galaxy Tab 7.7 vs. Toshiba AT1S0
Source: PC Authority

A few months ago it seemed as if the verdict was in regarding tablet screen sizes – the world had a yen for ten, as it were. The popular tablets were all featuring a 10in screen (or very close to a 10in screen) and other attempts at smaller form factors such as the Dell Streak and the original Samsung Galaxy Tab were mostly being seen as strange failed experiments. Luckily cooler heads prevailed and we’ve seen smaller sizes slowly creep back onto the market.
Comparison, online available, Very Short, Date: 04/10/2012
Rating: Total score: 83% price: 67% performance: 100% features: 100% ergonomy: 100%
80% Samsung Galaxy Tab 7.7 Review
Source: Laptop Mag

Samsung recently admitted that it's "not doing very well" in Android tablets. Will the $499 Samsung Galaxy Tab 7.7 change that? There's certainly a lot to like here. The device combines fast 4G LTE speeds and a dazzling display and wraps it all up in a .03-inch chassis. Consumers that are put off by the $499 price might want to consider the $249 (with contract) Pantech Element, which offers faster AT&T 4G LTE speeds in a waterproof chassis. If you don't want to make an expensive two year commitment for mobile broadband, consider Wi-Fi-only options like the Kindle Fire ($199) or Toshiba Thrive 7-inch ($379.99)
Single Review, online available, Medium, Date: 03/06/2012
Rating: Total score: 80%
Samsung Galaxy Tab 7.7 LTE Review
Source: Slashgear

This device is, again, what I’m gonna go ahead and say is the sweetest spot for tablets at the moment. If I had to choose between this device and the Galaxy Note (original), I’d choose the Note. I’m still of the opinion that tablets are mostly bonus devices made for fun rather than utility, and the Galaxy Note takes care of everything I could possibly want a smart device to do. That said, if you’ve got a want for a tablet, this one’s a magical size. If you’ve tried a 10-inch tablet and you find it sort of absurd, but still want a display larger than your everyday average smartphone, take a peek at this tablet at your local Verizon outlet. It’s certainly an entertaining device to play with.
Single Review, online available, Short, Date: 03/04/2012

Unfortunately, if you were hoping its small size would translate to a small price, you're in for a disappointment. Though no official UK RRP has been announced, early stocks are selling for £470 inc VAT. (The mid-price market will likely be served by the 10in and 7in Galaxy Tab 2 models recently unveiled at Mobile World Congress.) With the likes of Motorola's Xoom 2 Media Edition selling for £100 less, the Galaxy Tab 7.7 is perhaps more an object of desire than a realistic purchase.
Single Review, online available, Very Short, Date: 03/02/2012
Rating: Total score: 83% price: 50% performance: 83% features: 100% ergonomy: 100%
100% Samsung Galaxy Tab 7.7 Review
Source: Stuff TV

There's really only one thing wrong with the Tab 7.7, and that's the price. Even though it has a superlative screen and outstanding battery life, it's hard to justify when it costs £70 more than a high quality 10inch tablet. For smaller tablets, it's an even tougher sell: the 8.9inch Motorola Xoom 2 Media Edition is nearly as good but costs £150 less, and then there's the improbably cheap Kindle Fire, which simply has to hit UK shores soon – assuming we don't skip straight to the Kindle Fire 2. If we were Samsung, we'd ditch the Tab 2 and focus on getting the price for this down, because everything about it is the way a tablet should be. As it is, sidelining the star of the Galaxy Tab line-up seems a mistake.
Single Review, online available, Very Short, Date: 02/01/2012
Rating: Total score: 100%
Samsung Galaxy Tab 7.7 LTE (Verizon Wireless)
Source: PC Mag

An Android-powered tablet which connects to Verizon Wireless's 4G LTE network, the Samsung Galaxy Tab 7.7 is very, very similar to the Galaxy Tab 7.0 Plus ($399, 3.5 stars), which we reviewed in November, with a few notable differences. First of all, obviously, it's a little bigger – instead of a 7-inch screen, it's 7.7 inches. As I was holding and playing with it, though, that didn't change its identity as a 'small' tablet. I would never have been able to peg its size if I hadn't been very familiar with 7-inch tablets. Like other Samsung small tablets, it's very thin and light, at only 7.9mm thick and 12 ounces.
Single Review, online available, Very Short, Date: 01/26/2012

The Samsung Galaxy Tab looks and feels great, but it really is just a smaller version of its two larger counterparts. Whether there will be any point in choosing this smaller model over larger tablets will greatly depend on how it feels in use. We'll bring you a full review as soon as we can.
Single Review, online available, Very Short, Date: 09/05/2011

The Samsung Galaxy Tab looks and feels great, but it really is just a smaller version of its two larger counterparts. Whether there will be any point in choosing this smaller model over larger tablets will greatly depend on how it feels in use. We'll bring you a full review as soon as we can.
Single Review, online available, Very Short, Date: 09/05/2011

Overall, while the lack of microUSB is a concern and the build isn't quite as solid as an iPad, the Samsung Galaxy Tab 7.7in is nevertheless a seriously impressive tablet. If you're looking for a smaller alternative to the 9in and 10in tablet, this looks to be the pick of the bunch.
Single Review, online available, Short, Date: 09/01/2011