Alienware recently made an impressive foray into making an 18 inch gaming behemoth. While two video cards and some of the most powerful components grouped together in one ostensibly portable machine were a wonder just to contemplate, Alienware have now returned to the much more user friendly size of 17 inches. This is still desktop replacement size, but the 1 inch of difference should make it appreciably easier to carry around. On the outside, a muted silver hue encases the minimalist looking machine. The familiar Alienware head stands out in matte black, matching the keyboard and palm rests. For those wanting to showoff, this machine comes with that familiar Alienware programmable light show. The logo, the keyboard backlight, touchpad, and the alien head on the lid can be lit up and customized for color and be made to pulse.

At the high end of the available configuration options, the Alienware 17 features the 2.7 GHz Intel Core i7 4800MQ and the 4GB Nvidia GeForce GTX 780M. With 16 GB of RAM thrown in for good measure, only the most demanding games will require use of medium settings. The 17 inch, 1920x1080 resolution matte screen may be a disappointment to those who were looking out for the newer 3200x1800 resolution which has yet to be adopted by current gaming laptops. As is typical for machines this power hungry, the Alienware will allow for approximately 4 hours of light use. During more intensive gaming, plugging in is mandatory. Overall, this is a high-end machine with lots of power for the enthusiastic gamer with deep pockets.

Considered to be the Apple of the gaming industry by LaptopMedia, Alienware made quite an impression on the reviewer. An improvement over its predecessor, the Alienware 15 R3, the new Alienware 17 R4, powered by a 6th-generation Intel Skylake CPU (the quad-core i7-6820HK 2.7 GHz) and equipped with a discrete graphics card (Nvidia GeForce GTX 1070), is an upgraded, powerful version for many purposes, but especially gaming. The Alienware 17 looks significantly grown up and slim, yet it still has powerful features. “It gathers the best and the latest (well, excluding the CPU because they still haven’t updated it to Kaby Lake) of what the industry offers and puts it in a sleek new body while retaining some of the usual Alienware characteristics,” states LaptopMedia.

“The Alienware 17 feels like a refinement of 2015’s model, packing NVIDIA’s shiny new desktop GPU into a sleek new chassis that won’t see you break your back on the way to LAN parties,” says the page TrustedReviews. LaptopMedia also writes that by receiving a total revamp while staying true to Alienware’s roots, the Alienware 17 will appeal to the common gamer as well as to users with a more minimalistic and strict taste. Alienware’s laptops have steadily been moving towards thinner designs, and the new series takes a dramatic step towards slimness, says TechRadar: “To get here, the company completely redesigned the internal cooling system”. TrustedReviews gives a plus point for the chassis made by anodizing an alloy of aluminum and magnesium and for the redesigned “TackX” keyboard: “The alloy feels slightly more solid than past Alienware machines. We see a modest, but important upgrade with the keyboard”. LaptopMedia remarks that the new chassis has improved in terms of dimensions as well: “Coming from last year’s 34.4mm, this Alienware 17 R4 feels noticeably leaner with just 29.9mm profile. However, the R4 has gained weight (from 3.7kg to 4.4kg). Just wait until you see how the cooling system looks like and you will understand why it’s so heavy”.

With the 17.3-inch display available in 1080p, QHD or 4K resolution, one could go for the standard Full-HD version that does not feature Tobii Eye Tracking Technology but offers an IPS display with better viewing angles (LaptopMedia). Following a positive evaluation from TrustedReviews, the IPS panel’s 120Hz refresh rate is well suited for gaming and, even though blacks did not appear quite as inky as the reviewer would have liked, colors looked balanced and viewing angles were excellent. Particularly, MobileTechReview writes that the IPS display has a very good panel typical of high-end gaming laptops: “With calibration, it’s fine for professional photo and video work for the web. Given the fast GPU in our GTX 1070 model that allows for a solid 60 fps in today’s AAA titles, we saw very little tearing with Vsync enabled on the 60 Hz LG-Phillips panel when gaming”. Steve Wright, a reviewer at Stevivor.com, feels that the 4K display and Tobii Eye Tracking is crazy good and terrifying in equal measure. It allowed him to use his eyeline to target incoming asteroids with surprisingly great success.

Regarding the keyboard: “We would have appreciated if the keyboard was moved down closer to the palm rest area so we wouldn’t feel the heat so much but on the other hand, your palms will rest comfortable on the big wrist rest area” (LaptopMedia). TrustedReviews sees a modest but important upgrade in the keyboard: “Alienware lists it as having a 2.2mm key travel and rapid-response feature that lets it register more than 108 key commands per minute. I didn’t get close to reaching the key command limit, but found the keyboard comfortable to game on and especially reactive.” Speaking of the keyboard and the trackpad of the Alienware 17, LaptopMedia states that this notebook has long key travel, customizable RGB illumination with separate zones, and 6 programmable macro keys, yet still no media control: “The ergonomic shape and overall feel of the keyboard will prove useful for typing and gaming. It is hard to miss the LED-illuminated futuristic touchpad - excellent gliding surface, accurate, responsive and slightly mushy dedicated mouse buttons.”

The Alienware 17 R4 is available with the 6th-generation Skylake quad-core 2.7GHz Core i7-6820HK processor that is considered a high-performance chip with a relatively high consumption - 45W TDP, matching its little sibling, the i7-6700HQ. The Intel Core i7-6820HK with four cores is clocked at 2.7GHz and able to go up to 3.6GHz for one active core, 3.4GHz for two active cores, and 3.2GHz for four active cores. Powered by 8GB of VRAM and a GTX 1070 GPU, the Alienware 17 will happily cope with 1080p and 1440p gaming - 4K will still be a stretch if you ramp up things such as anti-aliasing, but it will handle most games with aplomb, according to TrustedReviews. And as the gaming tests of LaptopMedia show, this laptop achieved 59 fps with Full HD and maximum settings in “Grand Theft Auto V”, 55 fps with Full HD and maximum settings in “Tomb Raider”, and 84 fps for “Tom Clancy’s The Division”.

LaptopMedia ran the CPU stress test and noticed two things: “The CPU is clocked at lower than usual frequencies and doesn’t go above 3.1GHz with four active cores during full load.” Aside from that, this is comparable to some desktop PCs, with the CPU temperatures under full load reaching 65° to 70° Celsius (LaptopMedia). Similarly, according to MobileTechReview, the good news is that the GPU, even our NVIDIA GTX 1070 version, does not run hot, nor does the CPU: When gaming, the CPU cores average at a relatively cool 65° Celsius, and the GPU at 62° Celsius, which are impressively low temperatures, even for a desktop replacement gaming notebook. Surface temperatures are never burning hot, the keyboard and deck are the warmest. Nevertheless, the reviewer at Stevivor.com comments: “Whilst playing, I did notice the laptop’s fan getting louder as time progressed, but never distractingly so. All the while, intricate thermal ports kept air flowing and the laptop’s outer casing cool.” Furthermore: “During normal use or long hours of gaming, the center of the keyboard gets a bit warm (around 47 Celsius degrees),” writes LaptopMedia.

This is rarely the upbeat section of a gaming laptop review, but according to a battery test run by MobileTechReview, the Alienware 17 R4 with the 99-Whr battery and NVIDIA Optimus averages 6 to 6.5 hours of mixed productivity and streaming video use at 33 percent brightness. On the other hand, in order to simulate real-life conditions, LaptopMedia used their own script for different purposes: With automatic web browsing through 70 websites, the Alienware 17 R4 lasted for 267 minutes (4 hours and 27 minutes); with video playback, it lasted 3 hours and 41 minutes; and with gaming without the power source, it lasted for 54 minutes. MobileTechReview also noted about the battery life that the notebook shipped with a 240-watt power brick that is slim but has a big footprint, not unlike the laptop itself: “That’s a perfectly adequate power supply with watts to spare, so the charger never gets burning hot and charge levels don’t drop when gaming plugged into power.”

In general: “With the main difference being in the display department, the notebook will appeal to hardcore gamers, content creators and to those who like to keep it modest with a Full HD screen.” However: “For starters, the CPU and GPU are overclockable and the cooling system is fully capable of handling the extra clock speeds but Alienware hasn’t provided an easy overclocking setup” (quoted from LaptopMedia). With the extraordinary advantages in design and feature upgrades, the Alienware 17 R4 is considered to be a great laptop for gamers. Some of its advantages include the clean and sophisticated design, a good keyboard and touchpad experience, a well-designed cooling system, Tobii Eye Tracking (available with the 4K display only) and an impressive display with excellent image quality. That is the reason why Stevivor.com considers the Alienware 17 a very specific type of gaming device: “It’s a pretty, juiced-up package, perfect for those who don’t want to build their own machine and would also like a slightly more portable version of a pre-built PC tower.” However, this elegant notebook still has some unexpected flaws that could disappoint a bit. For example, its battery life is rather short, despite the large 99-Wh battery, overclocking is possible only through BIOS and 3rd party software. “In the end, the Alienware 17 R4 should be your premium gaming choice only if you are looking for the best possible gaming experience,” concluded LaptopMedia.

Alienware: Alienware was founded in the USA in 1996. Alienware established its EMEA (Europe, the Middle East, and Africa) headquarters in Ireland, in 2002. Alienware has belonged to the Dell Group since 2006. The product range mainly focuses on gaming laptops and desktops. Trademark is a slightly futuristic design with an alien logo. In addition, Alienware offers workstations for private and business customers.

Alienware belongs to the mid-sized manufacturers of the notebook market. There are some reviews with average ratings overall. 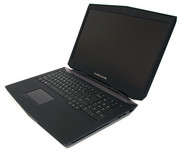