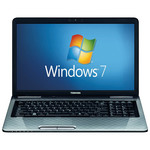 Reviews for the Toshiba Satellite L775-119

Archive.org version
Toshiba is the BMW of the laptop world. Its machines tend to be rather large and bulky, but they're solidly made and generally fun to use. Gaming isn't the forte of our version of the Toshiba Satellite L775, the L775-119. In most other areas, though, this is a fine 17.3-inch laptop, offering a great screen, comfortable keyboard and speedy performance.
Single Review, online available, Medium, Date: 06/02/2011
Rating: Total score: 80%