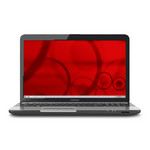 Reviews for the Toshiba Satellite L870-11J

Archive.org version
The Toshiba Satellite L870-11J works well as a desktop replacement, thanks to its large 17-inch screen and decent processing power. But there are occasional issues with the build quality and design that need pointing out.
Single Review, online available, Very Short, Date: 08/08/2012
Rating: Total score: 40%