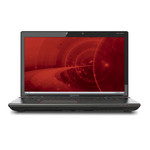 Although tablets and ultrabooks garner most of the attention in the PC world, few classes of systems have as much flair as gaming rigs, where hulking, ostentatious designs typically outweigh concerns for portability and affordability.Although the Toshiba Qosmio X875-Q7390 features abundant storage capacity, a Blu-ray burner, and a superlative 3D display, its inability to produce playable framerates in high-quality settings and its dismal battery life hold it back.
Single Review, online available, Medium, Date: 05/01/2013
Rating: Total score: 60%
70% Toshiba Qosmio X875-Q7390
Source: PC Mag

There's plenty to like about the Toshiba Qosmio X875-Q7390, like its cool design, abundant storage capacity, and, of course, its superlative 3D display. At the end of the day, however, performance is the paramount consideration when it comes to gaming laptops. That, along with battery life, ultimately conspire against the Qosmio X875-Q7390 and prevent it from snagging the Asus G75VW-DH72's title as Editors' Choice for midrange gaming laptops. Still, its content creation abilities and incredible display alone make it worth checking out, and we nonetheless recommend doing so.
Single Review, online available, Short, Date: 04/29/2013
Rating: Total score: 70%
80% Toshiba Qosmio X875-Q7390 Review
Source: Laptop Mag

The Toshiba Qosmio X875 is a gaming laptop both inside and out thanks to its design and strong internal specs that include an Intel Core i7, 1080p display and 16GB of RAM. The display is also stereoscopic 3D-enabled and it also has a Blu-ray burner, which is a rarity. The design of the X875 is rather simple with some gaming-esque flares, like the red edges and slick black diamond-textured aluminum exterior. It is rather big and heavy at 16.5 x 10.7 x 1.7-inches and weighs 7.7-pounds.
Single Review, online available, Very Short, Date: 04/05/2013
Rating: Total score: 90%
78% Strong gaming contender, but do we still need 3D?
Source: CNet

As one of only a handful of 17-inch gaming laptops we've seen since the launch of Windows 8, the Toshiba Qosmio X875 already stands out from all the slim ultrabooks and convertibles we've reviewed recently on that basis alone. We have yet to see a truly great gaming laptop built from the ground up with Windows 8 in mind, but the 17-inch Toshiba Qosmio X875 can be configured into a powerful, reasonably priced mainstream gaming machine.
Single Review, online available, Long, Date: 04/02/2013
Rating: Total score: 78% performance: 90% mobility: 60%

3630QM: An Ivy Bridge-based quad-core processor clocked at 2.4 GHz with Turbo Boost support up to 3.4 GHz. Offers an integrated HD Graphics 4000 GPU and a dual channel DDR3 memory controller.» Further information can be found in our Comparison of Mobile Processsors.

75.6%: This rating is not convincing. The laptop is evaluated below average, this is not really a recommendation for purchase.