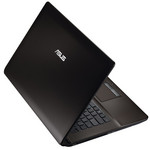 Reviews for the Asus K73E-XA1

Archive.org version
With a price tag of $800, the ASUS K73E-XA1 does have a good overall price for those looking for lots of storage space and support for Blu-ray media. The system also has a very comfortable albeit somewhat small keyboard. The problem is that the integrated graphics and poor viewing angles on the display make it less suitable for anything that is very graphic oriented.
Single Review, online available, Short, Date: 07/06/2011
Rating: Total score: 60%