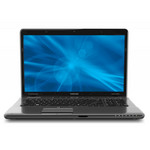 Reviews for the Toshiba Satellite P775-S7320

Archive.org version
The Toshiba Satellite P775-S7320 is worth considering if you're in the market for a big screen laptop with Core i7 power and a Blu-ray player. Granted, the 17.3-inch display is nice, but it would be even nicer if it could display full-blown HD content at 1080p. Despite its less than stellar Photoshop score it has more than enough power to make short work of your productivity and multimedia workload, and a relatively light chassis makes it a bit more portable than most desktop replacements. That said, the P775-S7320 can't match the gaming prowess of our current Editors' Choice, the HP Pavilion dv7-6143cl, which offers a discrete graphics card and a whopping nine-hour battery life.
Single Review, online available, Very Short, Date: 10/20/2011
Rating: Total score: 70%