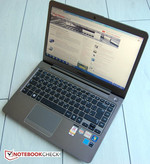 Again, the only performance bottleneck we experienced with the Series 5 compared to a typical Intel-based Ultrabook was the included 750GB hard drive. Since all Ultrabooks use a SSD or HDD with mSATA SSD for cache, it's unfair to compare these laptops without spending the extra $100 to upgrade the Series 5 with a SSD. Once upgraded, the SSD allowed this AMD-based ultrathin to compete head-to-head with the latest Ultrabooks; generally exceeding the performance of the ASUS Zenbook UX32 Ultrabook equipped with an Intel Core i5 processor. Keep in mind that the ASUS UX32 is priced at $899, so for just $749 ($649 street price plus $100 SSD upgrade) you can have a laptop with better overall performance.
Single Review, online available, Medium, Date: 10/25/2012
Rating: Total score: 70% price: 70% performance: 80% features: 80% mobility: 70% ergonomy: 70%
60% Samsung Series 5 535
Source: Techreview Source

The Samsung Series 5 535 is a 14-inch ultraportable that isn't quite as light and portable as some other similar laptops but it does have an optical drive and good graphics capabilities. It is powered by an AMD CPU, which does well against its Intel counterpart but it does come up slightly short.
Single Review, online available, Very Short, Date: 09/27/2012
Rating: Total score: 60%
70% Samsung Series 5 535 review
Source: CNet

Some laptop shoppers turn and run at the thought of swapping an Intel processor for one from AMD. The 4-pound Samsung Series 5 isn't as light and portable as some slim 14-inch laptops, but this AMD-powered version can be found at a significant discount if you shop around.
Single Review, online available, Medium, Date: 09/25/2012
Rating: Total score: 70%

AMD Radeon HD 7620G: Processor graphics card that is built into the Trinity A10 LV series APUs from AMD. Based on the VLIW4 architecture of the Radeon HD 6900 desktop series.