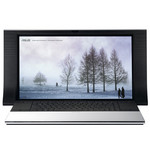 Reviews for the Asus NX90JQ-YZ068Z

Archive.org version
Not all laptops are designed to be carted around town. Some are supposed to sit in your room looking pretty, playing movies and music. The 18.4-inch Asus NX90Jq laptop offers decent specs and a good screen for media playback. At such a high price, though, your money will almost certainly be better spent elsewhere.
Single Review, online available, Long, Date: 09/08/2011
Rating: Total score: 60%
70% ASUS NX90 Review
Source: T Break

Archive.org version
Honestly, the ASUS NX90 is a great desktop-replacement notebook. It’s extremely stylish, has a gorgeous screen and great speakers. When opened up, it feels more like a desktop than a laptop. The only thing holding it back from greatness is the keyboard. In my opinion, ASUS should ditch the dual track pads, just put a massive one in the center on the palm rest, and have a full sized keyboard on the top, with more spacing between keys. Slightly raised buttons with backlighting and the higher than normal price-tag will be justified on an otherwise great package. And let’s not even get started on the nonsense 32-bit OS which won’t use more than 4GB of ram. At AED 9k (USD 2,450) I expect everything to be in excellent form. The price may have been justified for the newer Sandy Bridge model (NX90SN) that come with the Core i7-2630QM CPU and Nvidia GT 540M GPU, but with these specs, the price seems a bit too high.
Single Review, online available, Short, Date: 06/05/2011
Rating: Total score: 70%
90% Asus NX90Jq review
Source: Pocket Lint

Archive.org version
You hardly need it with the brightness of the screen, but we're surprised not to see a backlit keyboard on a system at this price. We'd rather it came with a Core i5 to improve battery life, but we're not sure how often you'd take it away from the power socket anyway. But to make the high price worthwhile for anything more than sheer style and desirability, you want to be using this to replace a TV, Blu-ray and possibly a stereo system as well. If you don't want to spend as much, the Dell XPS 15 gives you better value, but the NX90 outshines it in most ways - as you'd expect from a luxury system.
Single Review, online available, Medium, Date: 04/11/2011
Rating: Total score: 90%
70% Asus NX90Jq 18.4in Core i7 laptop
Source: Reg Hardware

Archive.org version
The Asus NX90Jq is a well-specified machine which packs a punch in terms of audio performance. Its striking design suggests it would be ideal as the centrepiece of a home entertainment centre, albeit a relatively expensive choice. Given the battery life, weight and balance issues, together with those dual trackpads, and I can't say I would be tempted lug it around it as my day-to-day laptop, but you'd certainly create an impression if you did.
Single Review, online available, Medium, Date: 01/05/2011
Rating: Total score: 70%
60% Asus NX90JQ review
Source: Techradar

Performance is good, but not all-conquering, and for those with serious multimedia interests, such as gamers and serious movie editors, there's more power on offer elsewhere for cheaper. For a multimedia machine, the screen brightness isn't quite up to scratch.

The Core i7-740QM is a high-end quad-core CPU for laptops (in 2010) with a relative small base clock rate and a high Turbo Boost max frequency of 2.93 GHz (for one core). Therefore, it combines the advantages of a slow clocked quad core CPU with a fast single core one. Compared to the faster Core i7 mobile CPUs, the 740QM only features 6MB L3 Cache.