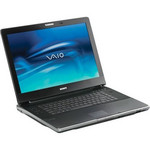 Reviews for the Sony Vaio VGN-AR590E

When I think of a laptop that encompasses all things media, the first thing that naturally comes to mind is a media center—the granddaddy of all laptops. Grand in the sense that it carries many of the media capabilities found in a home theater, topped off with the processing power of a desktop. The Sony VAIO VGN-AR590E ($3,299 direct) is no stranger to the media-center motif. After all, it is the first laptop to feature a Blu-ray high-definition disc drive. Its latest venture involves putting in the latest processing parts from Intel to complement the Blu-ray burner. Interestingly enough, Sony also throws in an external ATI Digital Cable tuner that's supposed to bring a cable set-top box experience to your PC, but that feature proved very problematic in our testing. If you're looking for the best Blu-ray experience on a laptop, the Sony VAIO VGN-AR590E is your ticket to HD bliss.
3.5 von 5, Display sehr gut, Preis/Leistung schlecht, Mobilität gut
Single Review, online available, Medium, Date: 09/06/2007
Rating: Total score: 70% price: 40% display: 90% mobility: 80%
80% Sony VAIO VGN-AR590E
Source: Laptop Mag

Sony's latest big-screen multimedia machine is a high-def delight that justifies its high price with smooth Blu-ray playback, a bundled CableCard-ready TV tuner, and enough oomph for gamers.
When it comes to entertainment, only a few notebooks can touch the VAIO VGN-AR590E, Sony's latest all-in-one high-def dynamo. Featuring Intel's speedy Next Generation Centrino processor, a powerful Nvidia graphics card, a massive 320GB hard drive for storing gobs of photos, music, and video, plus an integrated Blu-ray drive that writes as well as reads, the VGN-AR590E is a worthy desktop replacement for multimedia mavens willing to make the $3,299 splurge.  At 8.4 pounds, this system is a bit heavy but easy to move from room to room. We recommend you place this VAIO where it can be seen when guests drop by. The VGN-AR590E is a model of minimalist elegance, sporting a glossy, piano-black finish highlighted by silver trim.
4 von 5, Leistung sehr gut, Display sehr gut, Preis/Leistung mäßig
Single Review, online available, Medium, Date: 07/11/2007
Rating: Total score: 80% price: 60% performance: 90% display: 90%