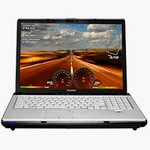 Reviews for the Toshiba Satellite X205-SLi4

At $2,199, the Toshiba Satellite X205-SLi4 offers decent performance, but its scores were so close to the much more affordable Gateway P-6831FX that we’re hard-pressed to recommend it. For $850 less you get comparable gaming scores (better on some tests, worse on others), longer battery life, and a ready-to-play configuration—without updates, downloads, hotfixes, and setting tweaks. The biggest reasons to get this system versus the Gateway are its higher-resolution display and larger hard drive (320GB versus 250GB), which isn’t enough justification in our book.
2.5 von 5, Display gut, Leistung mangelhaft
Single Review, online available, Medium, Date: 03/24/2008
Rating: Total score: 50% performance: 50% display: 80%
60% X205
Source: CNet