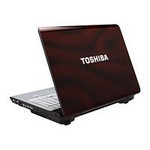 Reviews for the Toshiba Satellite X200-219