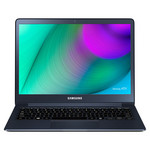 Samsung's ATIV Book 9 Blade system offers an extremely portable laptop system that doesn't compromise on connectivity like Apple's MacBook. Instead, it sacrifices a few other features by providing slightly less performance and lower battery life. Of key concern though is the small AC adapter pin that plugs into the laptop that is prone to being bent or broken.
Single Review, online available, Short, Date: 06/03/2015
Rating: Total score: 80%
70% Samsung Ativ Book 9
Source: CNet

It's rare that we get an opportunity to test a pair of Windows and OS X laptops so close in configuration, features, and design, and within weeks of each other. The Ativ Book 9 can safely be called a good alternative to the MacBook if you want something slim and light with a 12-inch higher-res screen, but need to run Windows.
Single Review, online available, Long, Date: 04/16/2015
Rating: Total score: 70%
60% Samsung Ativ Book 9
Source: Laptop Mag

The ATIV Book 9 sits in a tough spot. While its clearly looking toward the slim, clamshell design of a dedicated notebook, it is held back by its performance and battery life. Inputs are also a problem with an unresponsive touchpad and a cramped keyboard tarnishing the user experience. Admittedly, the notebook’s display is both bright and beautiful.
Single Review, online available, Long, Date: 04/03/2015
Rating: Total score: 60%

Model: Portability is the keyword when talking about the Samsung Ativ 930X2K, as it sleek and slim for all those instances you need to bring your work around from one meeting to another, or from one presentation to another. The shiny black body gives you an air of sophisticated professionalism. Weighing only 0.941 kg and measuring only 11.8 mm thick, it features a 12.2 inch screen with WQXGA technology, which makes graphics appear realistically, naturally vivid, colorful and sharp.

The display is covered with an anti-reflective layer for those days that you need to work in bright light or natural sunlight. It features a screen resolution of 2560 x 1600 pixels, which is really great for a screen this size. The laptop is powered by an Intel M 5Y31 dual core processor with a base clock of 0.9 GHz and a turbo clockk of up to 2 GHz with the Intel Turbo Boost technology 2.0. There is also an 8 GB RAM and a 256 GB SSD. Its portability is further increased by a battery life of 12.5 hours. A special ultra power saving mode is used when battery power drops to 10% and increases battery life. The OS is Windows 8.1 Pro 64 bit edition, which will speed operations up and prevent lagging.

5Y31: Broadwell-based ULV dual-core processor for tablets and 2-in-1 notebooks. Offers an integrated HD Graphics 5300 GPU and is manufactured in 14 nm.» Further information can be found in our Comparison of Mobile Processsors.

67.5%: This rating is bad. Most notebooks are better rated. This is not a recommendation for purchase.