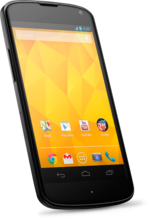 Reviews for the Google Nexus 4

The Nexus 4 is finally here and is priced at Rs. 25,990. If you have been waiting for this device, just go and pick it up. It’s awesome. The display is good, performance is excellent, you will be the first to receive all the Android updates and the phone simply looks gorgeous. On the downside, there is no expandable storage, the camera is lacklustre in low lighting and the earpiece has audio leaking. If you are searching for a smartphone between Rs. 25,000 and Rs. 30,000, the Nexus 4 can be at the top of your list along with the LG Optimus G, Samsung Galaxy S III, Samsung Galaxy Note N7000 and the HTC One X+.
Single Review, online available, Medium, Date: 06/11/2013
Rating: Total score: 80% price: 90% performance: 80% features: 80% workmanship: 80%
White Nexus 4 pictures and hands-on
Source: Pocket Lint

If you are thinkin' about my baby, it don't matter if you're black or white," as Michael Jackson sang, and that would be a good job too because as we found out with the white Nexus 4 just announced by LG and Google, it's white, but also black too. We were treated to a hands-on at the company's headquarters in the UK, and though the new Nexus 4 still doesn't have a UK release date, a spokesperson for the company told Pocket-lint that it isn't ruling anything out yet.
Single Review, online available, Short, Date: 06/03/2013

The Nexus 4 was our phone of last year. A game-changing super cheap but premium smartphone that offered great features, build and performance at a stunning price. Here we pit the Nexus 4 against Samsung's flagship Galaxy S4. The Galaxy S4 is a brilliant phone - although it's not without flaws. Here we compare the Nexus 4 and Samsung Galaxy S4, feature by feature. The Samsung often comes out on top, but remember that the Nexus 4 is significantly cheaper to buy outright. In fact, it remains an absolute steal at just £239, where the Galaxy S4 is a not unreasonable £450-£500.
Comparison, online available, Short, Date: 05/21/2013

Like the Nexus 10, the Nexus 4 is another class leader. Google have combined a refreshed version of their operating system with a well designed, powerful phone that’s more cost-effective than anything else on the market. The Nexus 4 goes head-to-head with the likes of the Samsung Galaxy S3 and iPhone 5, and while it might lose out in some areas such as slimness and storage options, its £239 price more than makes up for its few shortcomings.
Single Review, online available, Medium, Date: 05/16/2013
Rating: Total score: 80%

Since 2012 Google has also distributed tablets and smartphones. These products are frequently tested. While Google is not one of the most important hardware manufacturers, the customer interest is higher than in various East Asian manufacturers.
The products achieve above average ratings in the reviews (as of 2016).

85.17%: This is a good rating above average. Nevertheless you should not forget, that 10-15% of all notebook-models get a better rating.