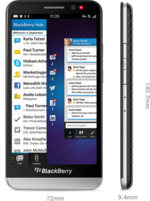 Reviews for the BlackBerry Z30

84% BlackBerry Z30 Smartphone Review | Notebookcheck
From 10 to 30 within a year. After the Z10's launch, the Canadian manufacturer takes a shot with its new Z30 model. BlackBerry uses hardware and software from the same source - thus meeting the demands on both is all the more difficult a task.
Powerful Passport is great for business, but the BlackBerry Z30 is now a bargain smartphone
Source: Tech Advisor

If you are looking to save money on a decent smartphone you could do a lot worse than the BlackBerry Z30. It is a decent 5in handset at a very good price. But if you want a BlackBerry that is truly fit for business, and you are able to spend on a full flagship smartphone, the BlackBerry Passport is a truly fascinating and powerful device. Just have a go with one first to make sure it is for you.
Comparison, online available, Very Short, Date: 11/03/2014
80% BlackBerry Z30 review - useful flagship BlackBerry smartphone that will suit business users
Source: Tech Advisor

There isn't the app ecosystem of the big two competitors but we can see the BlackBerry Z30 as a useful compromise of the needs of businesses that rely on BlackBerry's security model, and users who'd like something with the touchscreen power of iPhone-based handsets. This big handset deserves to win friends from anyone that can value its secure and robust features.
Single Review, online available, Very Short, Date: 11/12/2013
Rating: Total score: 80% price: 70% performance: 80% features: 80% workmanship: 80%
60% BlackBerry Z30 review
Source: V3.co.uk

The inherent security benefits of BES10 and BB10 mean for pure business use the Z30 is a very solid, albeit costly option. However, as we found with the Z10, as a BYOD device, its consumer offering is significantly less developed than competing ecosystems', like Android and iOS. This, combined with the fact the Z30 offers at best comparable and at times worse internal specifications than similarly priced Google and Apple smartphones, makes it hard to recommend the Z30 for anything but pure work use.
Single Review, online available, Long, Date: 11/06/2013
Rating: Total score: 60%
70% Blackberry Z30 Review
Source: Think Digit

Buy the BlackBerry Z30 if you are or have been a BlackBerry user and are looking to stay with the company. If watching movies or having the latest apps comes second to using social networking and messaging apps, and you aren't already invested in any other mobile OS, in that case too, the Z30 will suit you. For the rest who want the latest apps and the best possible multimedia and gaming experiences on a smartphone, there are better alternatives to consider than the Z30.
Single Review, online available, Medium, Date: 10/31/2013
Rating: Total score: 70% price: 70% performance: 80% features: 80% workmanship: 70%
65% BlackBerry Z30 Review
Source: Tech2.in.com

After spending a good week with the Z30, we find that it’s nothing more than an iterative update to the Z10, with a larger display. There are some welcome hardware additions like better sound, Wi-Fi Direct and bigger battery but most of the changes are software based so the asking price of Rs 39,990 seems a lot. With the Z10 now selling at a more sensible price, we fail to see why one would spend such a premium on the Z30, also considering one can get the G2 or the S4 in the same price range. Both flagships have a vastly bigger feature set, are more powerful and have access to a better app ecosystem. The Z30 makes a good buy if the price drops to about Rs 30,000 but for now, it’s too expensive, even for enterprise users.
Single Review, online available, Medium, Date: 10/26/2013
Rating: Total score: 65%
Hands on: BlackBerry Z30 review
Source: Techradar

The BlackBerry Z30 appears to be a capable, if unappealing smartphone, although it's never going to try and win the hearts of the masses. BlackBerry's core focus now is on the business sector and while consumer sales will continue to trickle through, most people will walk straight past the Z30 as they eye up the cheaper HTC One and Galaxy S4 or shiny new iPhone 5S. We're not sure this is the big hitter we were hoping for when making a sequel for the Z10, and while the Z30 ups the power this could be one of the final devices we see from BlackBerry in its current guise.
Single Review, online available, Medium, Date: 09/26/2013

If you still have not moved on from the Blackberry space, the Z30 might be the device to have your eye on. It looks like your regular rectangle-slab that most smartphones look like these days. It comes equipped with a 5-inch 720p HD resolution display. While it might not be as sharp or as bright as other flagship handsets, it gives great viewing angles and high contrast. It has also the largest screen in Blackberry’s arsenal currently.

Like its predecessors, Blackberry is moving away from its famed physical keyboards in favor of touchscreen ones for the Z30. At its core, it's housing a 1.7 GHz Snapdragon Pro processor and a Adreno 320 GPU. It's accompanied by 2 GB of RAM; the specs are comparable to other flagship devices out there and it provides a speedy performance whilst running the latest Blackberry OS with the Z30. It also comes with a microSD slot to expand your storage.

On the back, the 8 MP camera with LED flash is the same as their previous Z10 and Q10 models'. The Time Shift feature will take multiple shots for you so that you can choose the best shot later. It also comes with an HDR mode. Probably the best feature is its battery life. The Z30’s 2880mAh battery claims to give you 25 hours of mixed use. This means that the Z30 can last an entire day before needing a charge.

If you are in the market for a Blackberry, it's no rocket science that the Z30 is the best offering out there now.

MSM8960T: High end dual core SoC (Krait cores) including an Adreno 320 GPU.» Further information can be found in our Comparison of Mobile Processsors.

79.11%: This rating is not convincing. The laptop is evaluated below average, this is not really a recommendation for purchase.