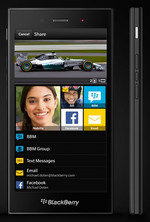 Reviews for the BlackBerry Z3

Archive.org version
The BlackBerry Z3 is a well built budget device. It looks way better than most similarly priced phones. The BB 10 OS is specifically designed to please the messaging junkies. The phone offers impressive music output. On the other hand, the camera lets it down. Plus, it's not ideal for one-handed usage. What makes it a hard sell though is the company's Z10, which is now available at a similar price tag. Currently, if you're looking for a sub-15k Blackberry, the Z10 is the way to go. Once it goes out-of-stock, you can consider the Z3.
Single Review, online available, Very Short, Date: 08/26/2014
Rating: Total score: 70% price: 60% performance: 70% features: 70% workmanship: 80%
70% BlackBerry Z3 Smartphone review
Source: T Break

Archive.org version
Herein lies the biggest conundrum when looking at the Z3 – the AED 899/- price. While the price is very competitive for a phone of its price range, the problem is that the previous flagship Z10 has now been reduced to a similar amount and can be found for cheaper at certain stores. So the question arises – is the Z3 worth buying over the stronger specced Z10? Well, the Z3 has a much stronger battery life and a bigger screen which certainly sounds appealing, so it’s a question of how important those two things are for you. If they are, Z3 is fantastic value. If you value more RAM and a faster processor on a smaller screen, the Z10 is a steal at its current price. BlackBerry Z3 is a successful attempt at a budget BlackBerry 10 experience and one that’s recommended to anyone looking to make the jump.
Single Review, online available, Short, Date: 07/14/2014
Rating: Total score: 70% price: 65% performance: 70% features: 70% workmanship: 75%
70% BlackBerry Z3 review: Good build and battery life, but a little too expensive
Source: Tech2.in.com

Archive.org version
The two reasons we would recommend the Z3 over the Z10 is if you want a larger display and longer battery life. As an overall package, the Z3 is a very tempting proposition if it drops in price. Once that happens, the Z3 makes a very good alternative to say, the Nokia XL. The slightly better specifications will ensure Android apps run a lot smoother as compared to Microsoft’s offering.
Single Review, online available, Medium, Date: 07/04/2014
Rating: Total score: 70%
60% BlackBerry Z3 Review: Sticking to What It Does Best
Source: NDTV Gadgets

Archive.org version
In that context, the BlackBerry Z3 is a solid phone. Comparing specifications and capabilities, it doesn't look good next to Android-based phones in its price range. On the other hand, if you value build quality, deal with hundreds of emails per day and don't have any use for multimedia features, it comes out on top. This phone delivers on the classic BlackBerry promise, finally updated for our century, for those few who still want that.
Single Review, online available, Medium, Date: 06/30/2014
Rating: Total score: 60% price: 70% performance: 60% display: 60% mobility: 60% workmanship: 80%
73% Blackberry shoots for the mid-range
Source: Digital Trends

Archive.org version
The BlackBerry Z3 makes a strong case for the Canadian phone maker in the mid-range segment. It steps away from BlackBerry’s usual modus operandi of pricing its phones too high and as a result it is worth recommending as a phone worth buying for Rs. 15,990, if you want a large screen, although a lower price would have made it a much better deal. At about Rs. 16,500, the Blackberry Z10 is a significantly better buy if you’re okay with its 4.2-in screen. Moving away from Blackberry, you can also consider the Motorola Moto G and the Nokia Lumia 720.
Single Review, online available, Medium, Date: 06/25/2014
Rating: Total score: 73%

BlackBerry has been in the mobile phone scene for a long time, however their presence has been slowly fading away with the arrival of many competitors. The BlackBerry Z3 aims to bring back some of its glory. However, to start things off, the BlackBerry Z3 is only available in Indonesia.

The BlackBerry Z3 may not have the most impressive hardware, but it has what it needs to provide for its users. The 1.2 GHz Qualcomm processor coupled with 1.5 GB of RAM ensures that users have lag free performance. It comes with 8 GB of native memory as well. The BlackBerry Z3 is equipped with a 2500 mAh battery that is able to keep the phone on for a full day of work.

The BlackBerry Z3 comes with all the standard connectivity for a phone such as WiFi, 3G, GPS and Bluetooth. However, it does not support 4G LTE, which makes sense as Indonesia doesn't have the infrastructure to support it anyway. The camera also falls shy with only 5 MP rear camera and 1.1 MP front facing camera. By today's standards, this is pretty low.

S4 Plus MSM8230: High-end dual-core Krait based SoC that includes a Adreno 305 GPU.» Further information can be found in our Comparison of Mobile Processsors.

68.6%: This rating is bad. Most notebooks are better rated. This is not a recommendation for purchase.