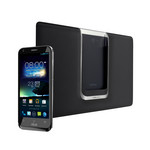 Reviews for the Asus Padfone 2

87% Review Asus PadFone 2 Smartphone | Notebookcheck
The good and the weird. Asus has announced the launch of the PadFone 2 for December. Exactly like its predecessor, the PadFone 2 is a combination of a smartphone and a tablet. We will be taking a look at a much more revealing form of the phone with all its secrets laid bare when compared to the last generation.
80% Asus Padphone 2
Source: Gadgetspeak

Asus are a company that I think of for computers and motherboards. So when the opportunity to look at a mobile phone from them it seems an interesting option. The name puzzled me for a moment until I related the ‘Pad’ part to a tablet. The minus points no micro SD card port, no replaceable battery and that proprietary charging connector.
Single Review, online available, Short, Date: 09/18/2013
Rating: Total score: 80% price: 60% performance: 80%
Review: Asus PadFone 2 phone-tablet combo
Source: Reg Hardware

The PadFone is such a good idea you wonder why nobody thought of it before. Despite the lack of storage expansion, the benefits of having a phone with an optional ten-inch screen and a reserve battery are obvious, while the handset itself is every bit as good as the Nexus 4. Better in some ways. The price isn’t exorbitant, either. If you opted for the most affordable Android alternatives - the 16GB Nexus 4 and the Asus MeMo Pad 10 - you would still be looking at around £530 but with 16GB less storage in the phone, a less powerful chipset in your tablet and a lot less convenience.
Single Review, online available, Medium, Date: 04/18/2013

85.57%: This is a good rating above average. Nevertheless you should not forget, that 10-15% of all notebook-models get a better rating.