Reviews for the Asus UX21

86% Review Asus Zenbook UX21E Ultrabook | Notebookcheck
Perfection. The power version of the Zenbook, with a Core i7, is as handy as a netbook but faster than most multimedia machines. How is this possible with a build height of 17 millimeters? The lightning-fast ADATA SSD sets the standard higher than ever.
Asus Zenbook UX21 Ultrabook, The New Thin
Source: Hot Hardware

From one point of view, the Asus Zenbook UX21's closest competitor would be the 11-inch Apple MacBook Air. Looking at specifications and features alone, the UX21 lines up quite nicely versus Apple's offering. In about the same price range (as our machine was configured), you get additional wired Ethernet connectivity and standard external display output, both of which aren't options for Apple's product.
Single Review, online available, Long, Date: 11/01/2011
ASUS Zenbook (UX21) Review
Source: AnandTech

Given the lack of any Intel-specific Ultrabook software I'm hesitant to even call this thing an Ultrabook. There's also the fact that, at least in the case of Intel Rapid Start Technology, being more of an Ultrabook in that sense would've been a step back in performance. In fact, I see no real reason to use that brand at all—which is likely why ASUS ended up calling it a Zenbook to begin with.
Single Review, online available, Long, Date: 10/22/2011

The Zenbook is Asus' first foray into the Ultrabook world, offering powerful guts wrapped up in a super-slim and sturdy aluminium shell. The Asus Zenbook UX21 is not only slim, light and attractive but also offers fantastic performance for a very reasonable price. It's very difficult to find much wrong with it.
Single Review, online available, Long, Date: 10/19/2011
Rating: Total score: 90%
Asus Zenbook UX21 and UX31 Ultrabook pictures and hands-on
Source: Pocket Lint

From our brief play with the Zenbook it looks like Asus has got a rather tasty gadget on its hands. There isn't much else, short of the Samsung Series 9 which can't quite boast the looks or build of the Zenbook. Expect more when Pocket-lint gets a lengthier play with the Zenbook.
Comparison, online available, Very Short, Date: 10/12/2011

The Asus ZenBook has a lot of promise and it'll be interesting to see if it lives up to its stated five hour battery life. Both the UX21 and UX31 will be available on October 21st, so it's likely to beat rival ultrabooks from Acer and Toshbia to market. Even better, at £849 inc VAT for the 11in model and £949 for the 13in version, the Zenbook either matches or undercuts Apple's pricing for the MacBook Air range. We would be lying if we said we weren’t tempted. We'll bring you a full review as soon as we can.
Comparison, online available, Short, Date: 10/12/2011

Lush to look at, the ZenBook just oozes class - which is why the price, while still placing these models into the premium bracket, came as a bit of a surprise. The 11.6in UX21 costs £849, while the 13.3in UX31 sells for £999 - coincidentally, the prices of Apple's two entry-level MacBook Air models. But spec for spec, the ZenBooks outclass their Apple competition by some margin, doubling the capacity of the SSD to 128GB and upping the processor in the £999 model to an Intel Core i7 against the Air's i5. Expensive they may be, but to those seeking the ultimate in PC style we reckon the new Asus ZenBooks are worth every penny. Check back on ITReviews soon, when we put the ZenBooks through their paces in a full lab-tested review.
Comparison, online available, Short, Date: 10/12/2011
Rating: Total score: 100%
Asus UX21 first look
Source: Trusted Reviews

The UX21 is a seriously impressive device. Its design is stunning and it packs in all the essentials for a great ultraportable notebook, or ultrabook. We would've liked to see Asus squeeze a memory card reader in there, and ThunderBolt would've been particularly nice, but these are hardly to be expected. All that remains to be seen is how its battery life holds up and how much it retails for when it arrives later this year.
Single Review, online available, Very Short, Date: 09/14/2011

91.5%: There do not exist many models, which are rated better. The most ratings get ratings, which are a bit worse. 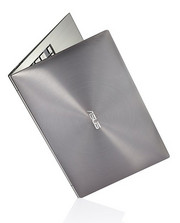 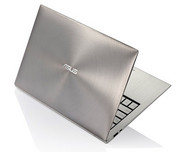