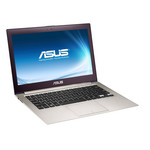 Reviews for the Asus UX32A-DB31

The Asus Zenbook was one of the first entrants in the new ultrabook category when it launched in late 2011. We liked that original system, despite a few serious flaws, as the all-metal design marked it as a direct competitor to the MacBook Air. Asus makes some of the most full-featured ultrabooks available, but this stripped-down Zenbook UX32A version is missing those extras and faces tough competition in its price range.
Single Review, online available, Long, Date: 07/25/2012
Rating: Total score: 70% performance: 60% mobility: 70%