Reviews for the Acer Iconia Tab A500

85% Review Acer Iconia Tab A500 Tablet/MID | Notebookcheck
Honeycomb Alternative! Acer's tablet presence has so far been fairly restrained, but is beginning to gain more and more traction with every new model. The Iconia Tab A500 offers an Nvidia Tegra 250 multi-core CPU/GPU, 32 GB of memory, a high resolution WXGA display, and the brand new Android 3.0 operating system. What can be expected from the slim 500 Euro device was tested by us.
Ten... high-end Android tablets
Source: Reg Hardware

Android Honeycomb 3.1 and subsequent updates will likely bring innovative features to the Iconia Tab and potentially to the tablet world, something Google must do to overcome the iPad's dominance. For now though, if you are going after the best possible tablet experience I would likely spend the extra $100 and get an iPad 2. Despite the inclusion of Flash and more flexibility in the OS and expansion options, today iOS is definitely more polished and smooth. The difference in weight doesn’t sound like much but after handling both tabs extensively, it will eventually catch up to you and you’ll appreciate having the slimmer iPad.
Single Review, online available, Medium, Date: 08/03/2011

Of course in the current market one cannot discuss tablets without mentioning the iPad 2. The A500 is 5.3mm thicker and 160g heavier, which will be a deal breaker for many users, although the price is certainly right. But Acer has definitely produced an alternative, if not a killer, that Android fans will appreciate.
Single Review, online available, Short, Date: 06/29/2011

Of course in the current market one cannot discuss tablets without mentioning the iPad 2. The A500 is 5.3mm thicker and 160g heavier, which will be a deal breaker for many users, although the price is certainly right. But Acer has definitely produced an alternative, if not a killer, that Android fans will appreciate.
Single Review, online available, Very Short, Date: 06/23/2011

Still, for the price the Iconia is a lot of tablet for your money. You’re getting the features of a laptop – minus the keyboard – on a device that can fit in a satchel. If the device we had was 3G-capable, the Iconia could have been our top Android tablet.
Single Review, online available, Very Short, Date: 06/20/2011

The Acer Iconia A500 feels similar to every other Android Honeycomb tablet once you get past its design. However, we're not crazy about some of the bits that Acer is responsible for. The look lacks confidence and the bold strokes of a real designer, it's also missing any cool extras like the keyboard dock of the Eee Pad Transformer and the screen falls short of IPS alternatives. What's more, the overall Android tablet experience still doesn't match that of the iPad when it comes to apps. We'd be happy to use this device as our everyday tablet companion, but would we splash out £450 on it? Probably not, given the other options out there.
Single Review, online available, Medium, Date: 06/20/2011
Rating: Total score: 70% price: 70% performance: 80% features: 70% ergonomy: 60%
80% Acer Iconia Tab A500 review
Source: Pocket Lint

Overall, you can’t go too far wrong with the Acer Iconia Tab A500 and it’s certainly worthy of consideration if it fits your budget and you crave that USB port or HDMI. Given how quickly Acer prices tend to drop, it could soon be a bargain too. But the design will deter some as it just doesn't look as good as it's competition.
Single Review, online available, Medium, Date: 06/09/2011
Rating: Total score: 80%
85% Acer Iconia Tab A500 10in Android tablet
Source: Reg Hardware

Acer has produced a fine product with the Iconia Tab A500. Its performance closely matches that of the Motorola Xoom but it is lighter, offers more connectivity and has a working microSD slot to expand the storage capacity. There was no 3G support in the model I tested but I thoroughly enjoyed using it just the same. It is, however, almost as expensive as the Xoom, so those on tighter budgets should consider the 16GB version which costs around £380.
Single Review, online available, Short, Date: 06/01/2011
Rating: Total score: 85%
60% Acer Iconia Tab A500
Source: Stuff TV

There are many good points. The speakers are better than Asus’ Transformer. Battery life, at over ten hours, is brilliant. Uniquely, the Iconia A500 also comes with the same kind of haptic feedback we're familiar with from Android phones, which makes typing on the touch screen more reliable.?And the price is right. At £450 this 32GB model might seem expensive, but there's a 16GB version on the way which will cost £70 less. But for all its pro points, the question remains. Why would you buy the Iconia A500 over any other Android tablet? We think probably not.
Single Review, online available, Very Short, Date: 05/25/2011
Rating: Total score: 60%
70% Acer Iconia Tab A500 Review
Source: T Break

In conclusion all I’ll say is that the Acer Iconia Tab is nothing remarkable in the state it’s in right now. Hardware wise it’s pretty solid, especially with the inclusion of the full-sized USB port, but it cannot reach its full potential until Google improves functionality with the next Honeycomb update. The Iconia tab is just good enough, not great. The only other thing working in its favor right now is its low price tag. Certainly, anybody who’s looking to get a new tablet should probably have a look at the Acer Iconia Tab, but right now the tablets market is still in it’s infancy to provide an experience rich enough to replace netbooks.
Single Review, online available, Short, Date: 05/25/2011
Rating: Total score: 70%
70% Acer Iconia Tab A500
Source: PC World

If you're set on buying an Android tablet today, the Iconia Tab is one of the best bets at this writing--it tops the Xoom in functionality, and its $450 price is significantly cheaper than the $750 no-contract price of the G-Slate. The Iconia Tab is no iPad-killer, but it does give hints of the power of Android's more open and flexible platform. While I found faults with the Iconia Tab itself, many of my gripes lie with Android 3.0; if Google could only fix that OS's issues and get the native app ecosystem jump-started, Android tablets might be on to something.
Single Review, online available, Medium, Date: 04/23/2011
Rating: Total score: 70%
83% Acer Iconia Tab A500 review
Source: PC Pro

In all, our impressions of the Iconia A500 are mixed. It feels a little slicker than the Motorola Xoom in use, and there are some useful bits of software included. It’s nicely designed too, with cameras that do a passable job of shooting the odd picture and video clip. Battery life, however, isn’t quite up there with the Xoom’s, and the screen isn’t as attractive as the Transformer’s. And at £447 for the Wi-Fi only version, it's hardly any cheaper than the iPad 2. As with the other Android 3 tablets we've seen so far, it’s almost there, but it still doesn't feel quite like the finished article.
Single Review, online available, Short, Date: 04/21/2011
Rating: Total score: 83% price: 83% performance: 83% features: 67% ergonomy: 67%
ACER Iconia Tab A500 Review
Source: Slashgear

But if a consumer had both an Acer A500 and an iPad 2 (or heck a, iPad 1,) and wanted to avoid appearing to have the same technology as everyone else, what then? Acer’s made a tablet that looks like none other, and it’s got a nice sound system on it, and it’s mostly metal, and it’s light. And it feels nice to hold, and there’s a USB port in it. And the SDcard port works. What other reason do you need?
Single Review, online available, Short, Date: 04/20/2011

The Acer Iconia A500 Android tablet offers many benefits: a sturdy and well constructed design, USB and HDMI-out ports and the attractions of Android Honeycomb 3.0. It's a little chunky and heavy, and the screen is difficult to see in sunlight, but overall we were impressed by this tablet PC.
Single Review, online available, Medium, Date: 04/15/2011
Rating: Total score: 80%
MWC 2011: Acer Iconia A100 and A500 reviews – first look videos
Source: It Pro

The Iconia 100 is the smaller of the family with a seven inch (1024 x 600 resolution) screen. It runs Nvidia’s Tegra 2 dual-core processor and has a mini HDMI output, along with its mini USB port. The Iconia A500 comes in at a much more sizeable 10.1in with a 1280 x 800 resolution screen. It does make it heftier though, weighing in at 700g. It runs on the same Nvidia Tegra 2 dual core chip as its little brother, the A100, and has the same sized cameras. However, the incorporation of a full size HDMI to stream content to your TV is a definite improvement.
Comparison, online available, Very Short, Date: 02/16/2011

NVIDIA GeForce ULP (Tegra 2): In Tegra 3 SoC integrated ultra low power GPU. Depending on the model clocked at 300 to 400 MHz.

2 (250): SoC (System on a Chip) with a integrated Corex A9 Dual-Core, GeForce ULP and other dedicated subprocessors (Audio, Video).» Further information can be found in our Comparison of Mobile Processsors.

76.77%: This rating is not convincing. The laptop is evaluated below average, this is not really a recommendation for purchase. 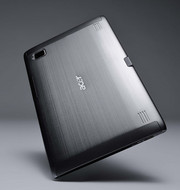