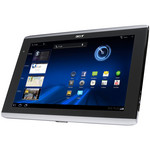 Reviews for the Acer Iconia Tab A501

Is this the tablet for you? Are you an ACER fan and just love the brushed aluminum design, or have you been waiting for a 3G/4G tablet that wont break the bank like the Xoom? While there is many tablets on the Android market that are thinner, prettier and even have 4G LTE the ACER Iconia Tab A501 is a complete package. ACER has spared nothing and offers outputs and connectivity, performance, portability and more all in a decently sleek package that is highly affordable. The ACER Iconia Tab A501 with AT&T 4G is priced at $329 with a new, two-year data agreement, or offered at $479 for the 16GB contract-free version. I don’t know about you but the HTC Jetstream and it’s $600+ price tag seems a bit much right about now.
Single Review, online available, Short, Date: 09/16/2011

The bottom line with the A501 is no different than the A500: It’s a good, solid tablet, with better-than-average support for media consumption, but there’s nothing spectacular about it—including its “4G” speeds. If you need a tablet with an always-on Internet connection, the Galaxy Tab 10.1 is the way to go, but if you can wait, you should; carriers are likely to offer more and more tablets in the coming months, hopefully with faster speeds than the A501.
Single Review, online available, Very Short, Date: 09/16/2011
Rating: Total score: 60%

NVIDIA GeForce ULP (Tegra 2): In Tegra 3 SoC integrated ultra low power GPU. Depending on the model clocked at 300 to 400 MHz.

2 (250): SoC (System on a Chip) with a integrated Corex A9 Dual-Core, GeForce ULP and other dedicated subprocessors (Audio, Video).» Further information can be found in our Comparison of Mobile Processsors.