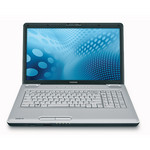 Toshiba has a reputation for making solid notebook computers at reasonable prices, and one of its latest and largest laptops, the Satellite Pro L550, is no exception. Professionals who are chained to a desk but don't want to be chained to a desktop will find the Satellite Pro L550 a very capable machine. It more than fulfills its mission of offering desktop power in a portable package.
Single Review, online available, Medium, Date: 01/21/2010
Rating: Total score: 80% price: 80% performance: 60% features: 100%