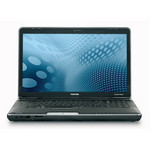 Reviews for the Toshiba Satellite P505-S8980

The Toshiba Satellite P505-S8980 is best suited for those conflicted souls who cannot decide whether to purchase a desktop or a laptop. Though technically a laptop, the Satellite P505, with its 18.4-inch wide-screen display and nearly 9-pound weight, will most likely be found sitting atop a desk rather than your lap. The Toshiba Satellite P505-S8980 boasts a huge display and a good feature set for the price, including a Blu-ray player, but we wish the build quality was a bit better.
Single Review, online available, Medium, Date: 12/04/2009
Rating: Total score: 67% performance: 70% features: 80% mobility: 30%