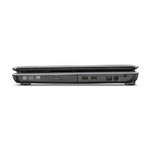 Reviews for the Toshiba Satellite L555-S7916

If you're looking for an inexpensive laptop with a large screen to park in the kitchen or use as a home-office PC, Toshiba's Satellite L555-S7916 is worth a look. The expansive keyboard, which includes a dedicated numeric keypad, raises the comfort level for word processing, Web site navigation, and spreadsheet editing chores--and that's about it. This Toshiba might make a good kitchen PC, but beware of poor Wi-Fi support and the inferior display image.
Single Review, online available, Medium, Date: 10/01/2009
Rating: Total score: 56% performance: 36% features: 72%

56%: Such a bad rating is rare. There exist hardly any notebooks, which are rated worse.