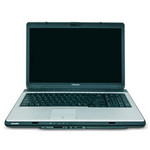 Reviews for the Toshiba Satellite L355D

Archive.org version
The Toshiba Satellite L355D is a tough laptop to critique. One the one hand, its feature set is merely adequate, its battery life below average, and (thanks to the inclusion of an AMD processor) its performance--while sufficient for such basic computing tasks as Web surfing, watching movies, and word processing--can't match that of laptops based on Intel processors. The 17.1-inch Toshiba Satellite L355D is average in every way, except for its below-average price.
5.6 von 10, Preis schlecht, Mobilität mäßig, Display gut, Leistung schlecht
Single Review, online available, Medium, Date: 04/30/2008
Rating: Total score: 56% price: 40% performance: 40% display: 80% mobility: 60%
70% Toshiba Satellite L355D-S7809
Source: Laptop Mag

59.67%: Such a bad rating is rare. There exist hardly any notebooks, which are rated worse.