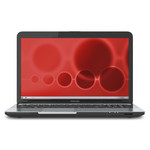 Reviews for the Toshiba Satellite S875-S7242

The Toshiba Satellite S875-S7242 isn't the slimmest or most portable laptop available on the market, but it packs solid hardware into an affordable package while pumping out admirable benchmark scores that hold their own against more expensive systems. For the user who's looking for a budget-friendly desktop replacement that won't stray too far from the desk (or, more appropriately, the power outlet), it's an overall solid choice. Otherwise, users with a bit more cash to spare, though, should opt for the Editors' Choice HP Envy 17 (2012), whose better battery life and more potent feature set, like a true 1080p display and Blu-ray player, justify the extra $150.
Single Review, online available, Short, Date: 11/06/2012
Rating: Total score: 70%
80% Toshiba Satellite S875-S7242 Review and Ratings
Source: Computer Shopper