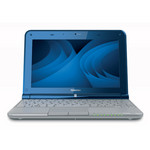 Toshiba's updated mini NB305-N600 offers a nice balance of keeping the old and giving it some new. It retains the same superb build quality and excellent keyboard and trackpad combination of the original. The Atom dual core processor does help performance a bit but it is still held back by the traditional memory limits and it fails to overcome the challenges of HD video.
Single Review, online available, Short, Date: 09/03/2011

The updates aren't major and there are better netbooks out there, but the Toshiba mini NB305-N600 has all your basic netbook needs for one low price.
Single Review, online available, Short, Date: 03/21/2011
Rating: Total score: 70%

N550: Dual core Atom with a TDP of only 8.5 Watt. Because of the slow clock speed of 1.5 GHz it may be sometimes even slower than a N465 Atom CPU.» Further information can be found in our Comparison of Mobile Processsors.