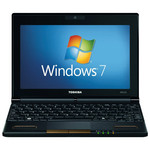 Archive.org version
With strong performance, a rugged feel and a generally good keyboard, the T oshiba NB520-10P is a great choice for schools. Although slightly more expensive than its rivals, it feels built to last and doesn’t come with too many compromises.
Single Review, online available, Very Short, Date: 02/18/2012
Rating: Total score: 83% price: 67% performance: 100% features: 83% ergonomy: 83%