The Gigaset GS100 is a new entry-level smartphone, which still offers a rich set of features and a panorama display. It has a simple plastic case. There are advantages and disadvantages to this cheap construction though. The plastic case can look cheap compared to a glass panel or metal construction but it is somewhat more resistant to cracks, breaking, scratches and fingerprint smudges. Also, a user can take the back off, which reveals a removable battery. The GS100 weighs 174 g despite its mainly plastic construction, making it heavier than many similar devices. With its MTK 6739 quad-core processor, 1 GB of RAM and Android 8.1 Oreo in the Go Edition, the GS100 delivers enough performance for almost any application from Instagram to WhatsApp. The GS100 runs on Android Go, which is great for entry-level smartphones. The Go edition requires less processing power and makes do with the built-in RAM, yet still delivers a smooth user experience. For games, the GS100 is powerful enough to handle light gaming, but users will need a faster smartphone if they want to play more demanding games. Plenty of memory and unlimited connectivity are ensured by a dual SIM and a separate MicroSD slot, which can expand the 8 GB of internal memory by up to 128 GB.

Snapshots and selfies are captured with 8 and 5 megapixels, respectively, and can then be viewed on the 5.5-inch 18:9 HD+ IPS display at a resolution of 1,440 x 720 pixels, which is excellent in this class. The dirt-repellent and scratch-proof 2.5D glass ensures a clear view, and with its slightly rounded corners, it transitions smoothly into the phone's body in Lemon Green, Cobalt Blue or Graphite Grey. The GS100 goes a step further in terms of features and technology. With its NSP audio processor, it targets users who place great value on an especially well-controlled sound with lots of volumes and a wider frequency range. The HD Voice feature suppresses background noise and interference during phone calls. The 3,000 mAh lithium polymer battery offers a decent performance with 550 hours of standby time or 80 hours of music listening (screen off). Thanks to the rapid charging function, with 1.5 A instead of 1 A, the GS180 is recharged 50 percent faster than standard phones. Being replaceable, the battery offers flexibility and extended durability. With the USB-on-the-Go (OTG) function, the user can connect all kinds of USB devices to the phone such as USB mice or keyboards. It also works the other way around and the phone can be used as a power bank. As a conclusion, the Gigaset GS100 is aimed specifically at price-sensitive customers who nevertheless still want a full-featured smartphone; whether used as a kid's first smartphone, the second phone on vacation, or as a device for everyday use.

The Toshiba Satellite Pro R50-C-1E8 is a quiet 15.6-inch office notebook that barely heats up. It features a Core i3 processor from the Skylake generation, which provides the right computing power. Toshiba delivered a basic, 15.6-inch office laptop that is aimed primarily at professional users with its Satellite Pro R50-C. Toshiba uses black plastic exclusively for the casing of its Satellite Pro. The base unit's upper side and lid's back are textured to imitate brushed aluminium. The black plastic is barely decorated with subtle straight lines, the keyboard and trackpad are both black, and only the lid’s Toshiba logo is decorated in metallic, shining plastic. At 2.3 kg, the R50 isn't the lightest laptop around but it's portable. The 6th generation Intel Celeron 3855U processor and the 4 GB of RAM installed has the computing power necessary to run a smooth office or Internet applications. The laptop barely heats up and always works quietly. Besides that, the 128 GB SSD would let the system respond faster and booting times would be shorter. Intel's HD Graphics 510 graphics unit takes care of video output. This laptop can render a few games smoothly. This applies to games that do not have high hardware requirements. Thus, the user will have to be satisfied with low resolutions and low-quality settings even in these games.

The matte 15.6-inch screen in Toshiba's laptop has a native resolution of 1,366 x 768 pixels. Both brightness (216.7 cd/m²) and contrast (390:1) are average. Toshiba installs a viewing angle dependent TN panel into its Satellite. Thus, the screen is not legible from every position. However, it has a matte finish to take the edge of brightly lit office environments. The R50’s keyboard has a sensible layout, with large keys and a number pad, and the Scrabble-tile typing surface proved pleasing to use. The keys were consistent, with a light, rapid action aided by the solid base. The trackpad was fine with Toshiba steering clear of any gimmicks. The smooth surface turns out to be accurate. Toshiba is quite generous with USB ports. The laptop offers four Type-A ports (2x USB 2.0, 2x USB 3.0 Gen.1). Furthermore, two video-outs are installed. The interface positioning could be improved. The left-sided USB port is on the same level as the wrist rest. The stereo speakers are situated above the keyboard behind a perforated cover. They produce a thin, mostly bass-free sound. Using headphones or external speakers is recommended for a better sound experience. As a conclusion, designed with both casual and professional users in mind, the Satellite Pro R50-C allows for quiet work. A high-definition display and a full-size keyboard improve performance. Thanks to its combination of performance and reliability, the Satellite Pro R50-C is the ideal notebook for the basic office environment. 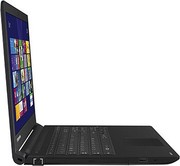 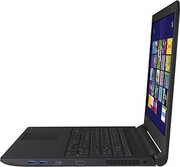