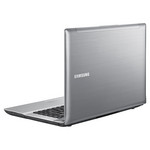 It's pretty obvious what we're going say here: for $799 the QX410 isn't just a good deal, it's a great one. Sure, we knew the specs were impressive, but the machine impresses even more when you get it out of the box, start typing on its awesome chiclet keyboard, and realize you get tip-top performance for over five hours on a charge.
Single Review, online available, Long, Date: 12/07/2010
Rating: Total score: 80%
80% Samsung QX410-J01
Source: PC Mag

While Samsung is a household name for many types of electronics, it's still a bit of a wild card with laptops for many shoppers. But with the QX410, the company shows it has the chops to go toe-to-toe with the big-name laptop makers. This thin-and-light laptop has the looks, features, and performance to compete with the best in its class, and the price is very good. But the built-in battery could be a deal breaker.
Single Review, online available, Long, Date: 12/01/2010
Rating: Total score: 86%
80% Samsung QX410
Source: Laptop Mag

The Samsung QX410 ($799) is one stylish and fast laptop. It's not a graphics powerhouse, but it offers plenty of oomph for productivity and enough muscle for some light gaming on the side. The notebook's lengthy battery life and strong Wi-Fi performance are also a boon for travelers. Those looking for better gaming and audio should check out the bulkier Dell XPS 14 (starting at $899), while the Sony Vaio EA offers splashy colors and Blu-ray (but integrated graphics) for $800. However, for the same price as the Sony, Samsung's machine offers a much faster processor, nearly 1.5 hours more battery life, and discrete graphics in an affordable and sleek package. Overall, the QX410 is an excellent choice.

Though the average person might not normally think of Samsung when it comes to laptops, that's likely to change if he sees this new favorite of ours. The electronics giant has a huge reputation in HDTVs, smartphones, and other gadgets, and its 2010 forays into notebook computers have become just as notable. Slickly designed and amply featured, the Samsung QX410 looks and plays the part of a more expensive high-end laptop at a price that's a solid value.
Single Review, online available, Long, Date: 11/24/2010
Rating: Total score: 80% performance: 80% mobility: 70%

NVIDIA GeForce 310M: The GeForce 310M is the successor of the GeFore G210M and based on the same chip with very similar clock rates (shader speed +30MHz to 1530MHz).

460M: The Core i5-460M has only 3 MB L3 Cache (compared to the I7-620M) and clocks between 2.53-2.8 GHz (Turbo Mode). Thanks to Hyperthreading, 4 threads can be processed simultaneously. An integrated graphics card (GMA HD) and a DDR3 memory controller are also included in the package.» Further information can be found in our Comparison of Mobile Processsors.