For the first time since its inception, the top spot in J.D. Power's annual Tablet Satisfaction Study has gone to the Microsoft Surface line of devices which narrowly edged out its Apple and Samsung competitors.
John Garcia, 04/06/2017
Tablet Surface Pro 4 iPad Pro Charts
4

Microsoft has yet another bragging point in regard to its tablet lineup: highest in overall satisfaction. A recent study by J.D. Power has taken a look at various aspects of today's top offerings and determined that, according to users, there's no better slate than the Surface.

The 2017 U.S. Tablet Satisfaction Study looks at five factors, which it has ranked in order of importance: performance; ease of operation; features; styling and design; and cost. These factors are subdivided into additional categories and cover a variety of current tablets. The study draws its results from the responses provided by a group of 2,238 tablet owners; it has found that Microsoft Surface devices score really high in the features as well as styling and design categories, allowing them to take the overall top spot even though other tablets scored better in other factors.

According to J.D. Power, Microsoft Surface owners use accessories—such as mice, keyboards, and styli—at a rate higher than the average for owners of competing tablets. The study points out that Surface devices come with a variety of input/output connections; they also include ample storage capacity. For these reasons, Microsoft has been awarded the highest rating in the "features" category.

Surface devices perform even better in the "styling and design" category. They sweep first place across the board, emerging unmatched in size, material/build quality, attractiveness of design, and even the location of the physical buttons.

In addition to the rankings mentioned above, the study reveals that younger customers find Surface tablets more attractive than competing devices such as Apple iPads or Samsung Galaxy tablets. Also, customers who purchase Microsoft's tablets are more likely to be "early adopters of technology," and according to J.D Power early adopters usually are more satisfied with their purchases, giving Microsoft an edge over its competitors.

The full report by J.D. Power includes additional detail on the study—it can be read here, or by clicking on the press release link below.

COSTA MESA, Calif.: 6 April 2017 — Microsoft ranks highest in overall satisfaction in the J.D. Power 2017 U.S. Tablet Satisfaction Study,SM doing so for the first time since the study’s inception. With an overall satisfaction score among tablet owners of 855 (on a 1,000-point scale), Microsoft’s achievement is largely due to its top rankings in the features and styling & design factors.

“The Microsoft Surface platform has expanded what tablets can do, and it sets the bar for customer satisfaction,” said Jeff Conklin, vice president of service industries at J.D. Power. “These tablet devices are just as capable as many laptops, yet they can still function as standard tablets. This versatility is central to their appeal and success.”

In features, Microsoft is the highest performer in three areas: variety of pre-loaded applications; internet connectivity; and availability of manufacturer-supported accessories. Microsoft Surface users have the highest incidences of accessory use, which underscores the device’s versatility. These accessories include a stylus (48% vs. 27% industry average); physical keyboard (51% vs. 14%); and mouse (27% vs. 6%), all of which have higher satisfaction. Microsoft also achieves the highest ratings in these features attributes: variety of input/output connectivity and amount of internal storage available.

Customers using Microsoft tablets are more likely to be early adopters of technology. More than half (51%) of Microsoft customers say they “somewhat agree” or “strongly agree” that they are among the first of their friends and colleagues to try new technology products. This is relevant because early adopters tend to have higher overall satisfaction (879 among those who “somewhat agree” or “strongly agree” with this statement vs. 816 among those who do not).

Microsoft also has a higher proportion of younger customers than their competitors. Microsoft customers are notably more likely to consider productivity features as important.  For example, when customers are asked the importance of their tablet to perform certain jobs well, Microsoft owners have the highest incidence of saying “very important” for jobs related to productivity. These include browsing the internet (90% vs. 75% industry average); emailing (76% vs. 61%); word processing (63% vs. 30%); and mobile payments/banking (53% vs. 40%).

Following are some of the key findings of the 2017 Study:

The U.S. Tablet Satisfaction Study, now in its sixth year, measures customer satisfaction with tablets across five factors (in order of importance): performance (28%); ease of operation (22%); features (22%); styling and design (17%); and cost (11%). The 2017 study is based on experiences evaluated by 2,238 tablet owners who have owned their current device for less than one year. The study was fielded between October and December 2016.

J.D. Power is a global leader in consumer insights, advisory services and data and analytics. These capabilities enable J.D. Power to help its clients drive customer satisfaction, growth and profitability. Established in 1968, J.D. Power is headquartered in Costa Mesa, Calif., and has offices serving North/South America, Asia Pacific and Europe. 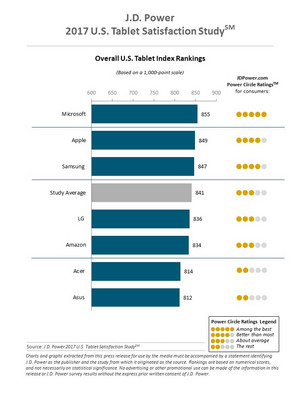