The operations of the HP Spectre x360 15-df0500nd convertible is handled by a 7th Generation Intel Core i7-7500U processor and the Nvidia GeForce 940MX graphics processor unit. The Intel Core i7-7500U has a base clock of 2.9 GHz, which leaves very little room for lag and sluggishness for work productivity. The inclusion of the Nvida GeForce 940MX as the HP Spectre x360 15-df0500nd’s graphics processor unit of choice, however, does come off as a surprise and has caused somewhat of a stir. The Nvidia GeForce 940MX is not too shabby when it comes to rendering graphics but this particular GPU model is considered to be one of the oldest in the scene. It is understandable that the design of the HP Spectre x360 15-df0500nd is more business-oriented, but the incorporation of an old GPU meant for gaming is a bit of a slump.

NVIDIA GeForce GTX 1050 Ti (Laptop): Mainstream graphics card based on Nvidia's Pascal architecture and successor to the GeForce GTX 965M. Is manufactured in a 14nm process at Samsung and the technical specifications are very similar to the desktop version.

20%: This average evaluation is exceptionally bad. There exist hardly any laptops, which are rated so negative. 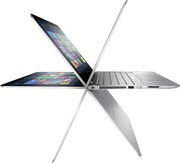