By adding a stunning Full HD display, Dell has addressed our biggest complaint with the original model. There’s still room for improvement, not least with the touchpad, but, as one of the few Full HD Ultrabook’s available, and a respectably priced one at that, the Dell XPS 13 emerges as a bigger bargain than ever in 2013.
Single Review, online available, Very Short, Date: 06/12/2013
Rating: Total score: 83% price: 83% performance: 83% features: 100% workmanship: 100%
83% Dell XPS 13 (2013) review
Source: PC Pro

By adding a stunning Full HD display, Dell has addressed our biggest complaint with the original model. There’s still room for improvement, not least with the touchpad, but, as the only Full HD Ultrabook available for less than £1,000, the Dell XPS 13 emerges as a bigger bargain than ever in 2013. It wholly deserves to take its place at the top of PC Pro’s A-List.
Single Review, online available, Short, Date: 04/05/2013
Rating: Total score: 83% price: 83% performance: 83% features: 100% workmanship: 100%
80% Dell XPS 13-MLK review
Source: IT Reviews

The Dell XPS 13-MLK is a good fit for the road warrior who wants to carry some multimedia horsepower with her. Its 1080p screen, capacious SSD, and Core i5 power will go a long way if you need to rework a complex PowerPoint presentation or work on some photos for a pitch on the road. They're also good components for the travelling artist, especially if you're already used to carrying your work on an external USB 3.0 drive. The things holding the XPS 13 back from our highest honors are the lack of a touch screen and a lower battery life than the current high-end ultrabook Editor's Choice, the Asus Zenbook Prime Touch UX31A-BHI5T. Thanks to a better bang for the buck and that touch screen, the Asus UX31A-BHI5T holds on to its ultrabook crown.
Single Review, online available, Short, Date: 03/25/2013
Rating: Total score: 80%
What a Difference 1080p Makes
Source: AnandTech

I don't think I'm out of line for being disappointed that the fundamental flaws of the Dell XPS 13's chassis design that I cited a year ago haven't really changed. Maybe I'm the only person that uses Intel's Quick Sync, but I've found it to be a tremendously useful tool in the field as a videographer just for making it easy to hand off YouTube ready clips to anyone who wants them, and the lack of an SD card reader in the XPS 13 is aggravating.
Single Review, online available, Long, Date: 03/21/2013

Dell's XPS 13 may seem a bit bland by the latest Windows 8 standards with ultrabooks featuring touchscreens but it still offers a solid and compact option for those wanting a premium feeling system. The updated internals offer an additional USB 3.0 port and give it better battery life while leaving performance slightly improved. It is a shame that they didn't take a bit more time to update it more with an SD card slot or a higher resolution display.
Single Review, online available, Short, Date: 03/12/2013
Rating: Total score: 80%
72% Still can't touch this sleek ultrabook
Source: CNet

The Dell XPS 13 is a slightly fancier version of last year's Dellbook Air: compact, functional, and upgraded with an excellent display. But its price -- and its lack of touch-screen options -- leave it as a product I'd have some reservations recommending for everyone. It feels like last year's product in a 2013 Windows 8 world that's moved on from basic ultrabooks -- or, at this price, one that at least includes touch.
Single Review, online available, Medium, Date: 03/07/2013
Rating: Total score: 72% performance: 70% mobility: 70%
Revisiting Dell's XPS 13 Ultrabook, In Full HD
Source: Hot Hardware

Dell is proud as peacock about the display upgrade it gave the XPS 13, and it should be. Not only does it boast a Full HD 1080p (1920x1080) resolution providing end-users with more real-estate than is typical from a 13.3-inch display, but it's also an extremely high quality panel. Colors pop off the screen, it's bright and vibrant, and it's not saddled with strict viewing angles. In fact, you can still see the screen very well from the side.
Single Review, online available, Long, Date: 02/28/2013

We found almost nothing to complain about aside from a limited number of ports (just two USB, DisplayPort and no media card reader). The XPS 13 isn't inexpensive starting at $999 but for the money you're getting perhaps the best packaged Ultrabook on the market. We're happy to recommend the Dell XPS 13.
Single Review, online available, Medium, Date: 02/21/2013
Rating: Total score: 80% price: 80% performance: 80% features: 80% workmanship: 80%
80% Dell XPS 13 (2013)
Source: Techreview Source

Dell has refreshed their XPS 13 Ultrabook with Windows 8, a 1080p display and a solid-state hard drive to speed up boot times. While it does deliver on performance, it falls short on battery life and lacks a touch screen, which is surprising considering the relatively high price.
Single Review, online available, Very Short, Date: 02/06/2013
Rating: Total score: 80%
80% Dell XPS 13 Review
Source: Digital Trends

We know the XPS 13 is a year-old design. If that knowledge was somehow blasted out of our memory, however, we wouldn’t have noticed. In some areas, like build quality and battery life, this aging system remains more advanced than competitors just coming to market. Despite its advantages, the original version was held back by its ho-hum 1366 x 768 display. The 1080p panel resolves that problem entirely.
Single Review, online available, Medium, Date: 02/06/2013
Rating: Total score: 80%
Dell XPS 13 Review: Editor’s Choice Windows 8 Ultrabook
Source: Notebooks.com

The Dell XPS 13 is a great Ultrabook that delivers a lot of features in a small package. With a starting price below $1,000, the XPS 13 delivers serious value to shoppers looking for a good looking, powerful Ultrabook. Power users should consider the $400 price bump to get a 1080P HD display, double the RAM and double the storage, which still leaves the XPS 13 priced competitively with a similarly configured MacBook Air 13-inch. At the entry-level, the XPS 13 is comparable to the 11-inch MacBook Air on price, but offers a larger screen.
Single Review, online available, Medium, Date: 02/05/2013

We're glad that Dell updated its XPS 13 with a faster processor, 256GB SSD and a full HD display. We also continue to love the compact design with soft-touch finish. However, $1,599 is a lot to spend for a Windows 8 notebook that doesn't offer touch or an SD Card. Although it doesn't offer as much battery life (unless you upgrade to the optional slice), the Acer Aspire S7-391 has an even thinner and lighter design than the XPS 13 and includes a 1080p touch screen.
Single Review, online available, Medium, Date: 02/05/2013
Rating: Total score: 60%

The Ultrabook concept was announced by Intel at Computex 2011. This new generation of notebooks would use low power Intel processors, have an extremely thin profile and could also include certain tablet functions. We’ve seen a huge number and variants of Ultrabooks by many manufacturers in the first wave of these ‘MacBook Air-killer’ devices. Dell seemed to take it slow and only released their first Ultrabook in the first quarter of 2012. While most manufacturers decided to brand their Ultrabooks under new names and with many variants and sizes, Dell used its already prominent ‘XPS’ range to market theirs with just one size.

The Dell XPS 13 certainly turns heads. Like its bigger brother, the Dell XPS 14Z, it has a curvaceous silver aluminium body with a reduced chassis size for its screen. This makes it real compact even for an Ultrabook. Dell had managed to squeeze a 13 inch display into what they say is an 11 inch body. In reality, it doesn’t really get to that but it is close enough and is definitely smaller than all the other 13 inch Ultrabooks. The XPS13 has a carbon fiber bottom covered with a thin rubberized coating making keeping the laptop firmly in its place when typing. The bonded Corning Gorilla Glass display gives the display a slightly more solid feel.

Dell offers the XPS 13 for 999 € onwards same as the Asus Zenbook UX31 which is its main competitor. However, its 1366 x 768 display resolution is noticeably lower than the when compared to the 1600 x 900 panel on the UX31. Advantages of the XPS 13 over the UX31 include its backlight keyboard, more responsive keys and a smaller size. 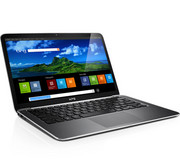