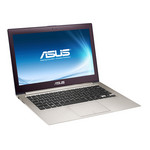 In fact, there are only two areas in which the UX31A falls behind, the first of which is battery life. Even here, though, the Asus is far from awful: in our light-use benchmark it managed 7hrs 11mins, which isn't amazing but still perfectly respectable. In the end, however, the main gripe we have with the Zenbook Touch UX31A is its price. It performs well in every category, and it's drop-dead gorgeous to boot, but at £1,500 it's simply too expensive to recommend. For our money, the Lenovo Yoga Pro 2 and Dell XPS 12 are by far better buys.
Single Review, online available, Short, Date: 12/04/2013
Rating: Total score: 67% price: 50% performance: 83% features: 83% workmanship: 83%