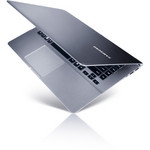 Reviews for the Samsung ATIV 900X3F-K01US

77.5%: This rating is not convincing. The laptop is evaluated below average, this is not really a recommendation for purchase.