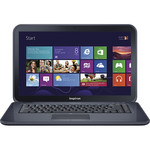 Reviews for the Dell Inspiron i15z-4801slv

Archive.org version
The Dell Inspiron 15z (I15Z-4801SLV) will appeal to mainstream users who need Core i7 multimedia prowess in their day-to-day lives. This might mean the world to a budding Spielberg or Ansel Adams, who will want to work on their latest masterpiece, and then share it via DVD or by displaying it on a HDTV via HDMI. For most mainstream users, however, the Editors' Choice remains the Asus VivoBook S400CA-UH51 as it's a better option for mainstream PC users at a better price point.
Single Review, online available, Short, Date: 06/05/2013
Rating: Total score: 80%
80% Dell Inspiron 15z (I15Z-4801SLV) review
Source: IT Reviews

Archive.org version
The Dell Inspiron15z (I15Z-4801SLV) is a traditional interpretation of an ultrabook laptop. Tipping the scales at the thick and heavy end of the ultrabook specifications, the Dell Inspiron 15z (I15Z-4801SLV) gives you extra features to justify its bulk. It's a good pick for the traditional laptop user who wants a new, fast laptop.
Single Review, online available, Medium, Date: 05/30/2013
Rating: Total score: 80%