We didn't think it would be Acer who would set a new standard for Ultrabook design, but credit where it's due, the Aspire S7 is one of the most stunning laptops we've seen in recent years. Dual-torque hinges, an impossibly-thin body and a Gorilla Glass top combine to create a chassis that's extremely well built and beautiful to behold.
Single Review, online available, Long, Date: 04/23/2013
Rating: Total score: 70%
Acer Aspire S7 ultrabook review
Source: Liliputing

Acer has designed an ultrabook that’s thin, light, attractive, sturdy, and powerful. But it’s not a perfect portable computer. The Acer Aspire S7 is hampered by lousy battery life, an odd keyboard, a high-resolution display that’s both a blessing and a curse (depending on how you use it), and a jet engine-like exhaust fan.
Single Review, online available, Long, Date: 01/17/2013

If you’ll pardon my slaughtering of Neil Armstrong’s famous quote from the moon landing, there are two areas I want to focus on for the conclusion. First, there’s what Acer has done today relative to the Acer of years past; second is how the end result of those efforts compares with what other companies are doing.
Single Review, online available, Long, Date: 01/07/2013

In its definition of what qualifies as an ultrabook laptop, Intel says an ultrabook with a touch screen is allowed to be 2mm thicker than one without. Astonishing: The thinnest and sexiest ultrabook we've seen is a touch-screen showpiece for Windows 8, as speedy as it is convenient and a sure-fire hit for the executive suite. But it's not cheap, and battery life could be better.
Single Review, online available, Long, Date: 12/12/2012
Rating: Total score: 80%
82% Windows 8 in premium touch-screen design
Source: CNet

The slim, premium-feeling Acer Aspire S7 was one of the very first Windows 8 laptops I spent a significant amount of time with in the weeks before the official release of Windows 8. One of the few standout products from the first wave of Windows 8 laptops, the Acer Aspire S7 proves that Apple does not have a monopoly on great design.
Single Review, online available, Long, Date: 11/28/2012
Rating: Total score: 82% performance: 80% mobility: 90%
Acer Aspire S7 review (13-inch): great Ultrabook, a shame about the battery life
Source: Engadget

With each successive generation, Acer comes closer to building the perfect Ultrabook. Its first model, the S3, had a low-rent feel, with short battery life, trailing performance and a stiff trackpad. The S5 improved on that with a nicer design and blazing speeds, due to a RAID 0 disk setup. But thanks to a low-res screen, among other shortcomings, it ultimately felt overpriced for what it was.
Single Review, online available, Long, Date: 11/20/2012

The Acer Aspire S7-391-9886 is a media performance laptop for the traveling artist, similar to the main audience for the Apple MacBook Pro 13-inch (Retina Display) and the current Editors' Choice for ultrabooks, the Asus ZenBook Prime UX32VD-DB71. All three give you 1080p (or greater) resolution in a 13-inch portable package, as well as good multimedia benchmark performance. The S7-391-9886 is certainly the way to go if you want the slimmest possible touch-screen system to commute with you on the train. However, the other choices may be better if you're a plane commuter, since they have better battery life overall. The Asus UX32VD-DB71 in particular comes with discrete graphics and a much less dear price tag of $1,299. Even the other Windows 8 systems with touch screen (Dell XPS 12 and HP Envy TouchSmart Ultrabook 4t-1100) have better battery life than the S7-391-9886. Again, if you have $1,700 to spend, you'll probably be happy with the S7-391-9886, but for a little more ($200), you're in upgraded MacBook Pro 13-inch (Retina Display) territory. And that laptop will make it through a continental plane trip with many minutes to spare.
Single Review, online available, Very Short, Date: 11/16/2012
Rating: Total score: 70%
Acer Aspire S7-391-9886
Source: Laptop Mag

With a killer 1080p touch screen, sexy-as-heck design and blazing SSDs, the Acer Aspire S7 seems poised for greatness. But in a $1,649 ultraportable, we expect at least 5 hours of battery life -- and supplying a little over 4 hours is a real shame. Road warriors will really need to spring for the optional extra-capacity battery to get the most out of this system.
Single Review, online available, Long, Date: 11/09/2012

75.5%: This rating is not convincing. The laptop is evaluated below average, this is not really a recommendation for purchase. 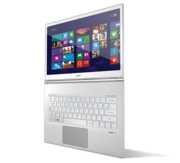 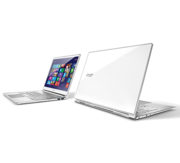 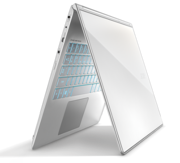