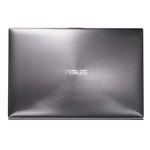 Archive.org version
The Asus Zenbook UX31A represents an incremental evolution over the original UX31E, but the improvements are welcome. The Ivy Bridge CPU and high resolution panel finally realizes the potential of the sleek chassis. The touchpad is much improved, though the keyboard is the same flat, Chiclet style. The real star of the show, however, is the 1080p LCD display. Editing photos or viewing movies on the system is a real treat, and made better by the reasonably good built-in speakers. The UX31A is not without quirks, like the oddly partitioned storage system. But overall, the new Zenbook represents a near-pinnacle of the Ultrabook design. It performs well, is super-slim and light, and looks fabulous.
Single Review, online available, Very Short, Date: 08/13/2012
Rating: Total score: 80%
80% Asus Zenbook Prime UX31a review
Source: Pocket Lint

Archive.org version
Quite a laptop then from Asus. We can’t think of a much better Ultrabook right now, particularly for those who are after a really top quality screen. In fact at £1499 it even makes a viable cheaper alternative to the more expensive MacBook Pro with Retina Display.
Comparison, online available, Short, Date: 07/26/2012
Rating: Total score: 80%
100% Asus Zenbook Prime UX31A
Source: Digital Versus

Archive.org version
After the UX31E and UX21E, Asus is releasing the Zenbook Prime UX31A, the crowning jewel of its second generation of ultrabooks. While in terms of power, battery life and finishing not much has changed since the excellent UX31E, the Zenbook Prime UX31A adds a second USB 3.0 port and, most importantly, a superb, matte, Full HD IPS display. That bumps it up to the coveted five stars.
Single Review, online available, Medium, Date: 07/13/2012
Rating: Total score: 100%
85% ASUS Zenbook Prime UX31A Ultrabook review
Source: Good Gear Guide

Archive.org version
Excellent overall performance and a stunning screen are just two important features that the ASUS Zenbook UX31A brings to the table. It's thin, light, has a backlit keyboard and its battery life is impressive. It still isn't perfect, and our primary gripe with this model is its touchpad, but it doesn't overshadow the strong Ivy Bridge-based configuration and the beautiful IPS-based screen.
Single Review, online available, Long, Date: 07/12/2012
Rating: Total score: 85%

88.17%: This is a good rating above average. Nevertheless you should not forget, that 10-15% of all notebook-models get a better rating.