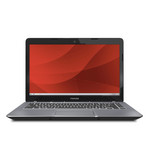 Reviews for the Toshiba Satellite U845-S404

If you're in the market for a thin and light, not-too-expensive laptop, the Toshiba Satellite U845 isn't exactly a slam dunk, but it's certainly worth considering. While the build quality, battery life and overall performance are about on par with competing machines, we've tested models with more comfortable keyboards, and if you do your homework you'll find laptops offering better specs for the same money.
Single Review, online available, Long, Date: 08/20/2012

Toshiba's Satellite U845 is an attempt to make a slightly larger but still affordable ultrabook under Intel's new second generation guidelines. For the most part, the slightly large 14-inch screen doesn't really add that much more to the system other than being slightly larger and heavier than the 13-inch ultrabook. The one benefit is that it does feature more ports such as Ethernet.
Positive: variety of ports (Ethernet) Negative: heavier and larger than 13-inch ultrabook
Single Review, online available, Short, Date: 07/26/2012
Rating: Total score: 60%