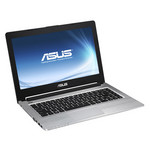 Reviews for the Asus S46CA-XH51

There's plenty to like about the Asus S46CA-XH51, including its handsome design, built-in optical drive, and reasonable price. Alas, however, its so-so performance dilutes its potency as a sure-fire portable solution for small businesses. That's why the Lenovo X1 Carbon's higher price tag and status as our Editors' Choice for business ultrabooks both remain justified. If design and affordability outweigh performance on your list, though, it's worth looking into.
Single Review, online available, Short, Date: 12/27/2012
Rating: Total score: 70%
60% Asus S46CA-XH51
Source: IT Reviews