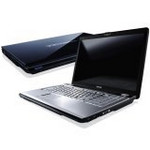 Reviews for the Toshiba Satellite P200-12D

Toshiba's Satellite family of notebooks keeps growing and features models that cover most aspects of laptop design. The Satellite P200 range sits towards the higher end of the family line-up and, of the P200 series, our review model, the 12D, is the current flagship of the range, offering a good feature-set together with a reasonable price tag. It's a big boy, measuring 399 x 288 x 36mm and weighing in at just over 4kg (with the power brick), so it's definitely aimed at replacing your desktop PC; a job it does admirably well with its specification. Despite the poor graphics performance - and if you're not interested in playing games on a laptop that hardly matters - Toshiba's Satellite A200-12D is a good all-round system with a major trick up its sleeve in the form of a built-in HD-DVD drive and HDMI output.
Leistung mangelhaft
Single Review, online available, Short, Date: 11/13/2007
performance: 50%

ATI Mobility Radeon HD 2400: This DirectX 10 graphic card from ATI is the direct competitor to the NVIDIA GeForce 8400M GS graphic card for laptops. It features the Avivo HD video engine. The performance is not enaough for DX 10 games and high settings.

T7100: Entry level to mid-range (at the time of annoucement) dual core processor based on the Merom core.» Further information can be found in our Comparison of Mobile Processsors.