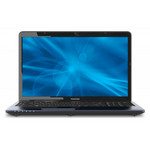 Reviews for the Toshiba Satellite L775D-S7206

At a discount price of $599, I am simply not pleased with this notebook for obvious reasons. The LCD panel doesn't perform well for modern standards, the CPU won't run at full Turbo speed, and the physical GPU advertised was a lie and doesn't exist. I'd say this notebook runs like an OLD Dual-Core with a faulty wireless adapter. The notebook handles 2D video performance for Blu-Ray playback fluidly with no skips or hiccups on a 17" display, and that's the ONLY reason to purchase it. It's essentially just a stable 17" Blu-ray player at a sub-par 1600x900 native resolution with the added bonus of bad viewing angles.
Single Review, online available, Very Short, Date: 08/24/2011
Rating: Total score: 60% performance: 50% display: 60% mobility: 60% workmanship: 70% ergonomy: 60%
Llano in the Wild: Toshiba's Satellite L775D-S7206
Source: AnandTech

I won't lie, I was looking forward to doing this review as an opportunity to weigh in with my peers on Llano, and that's largely because I do think we've been a bit unfair to it and I see the value in it. Jarred's concern regarding AMD's Fusion APUs is a fair one: released right now they're alright, but they're really a year or two late. It's true, but I'm not convinced it's entirely fair.
Single Review, online available, Long, Date: 08/12/2011