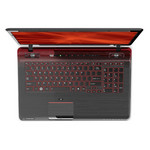 The laptop was priced around 900 when I bought it. This is a really good deal for a laptop with this performance. This is why I gave it 5 stars even though it does have some issues with the thickness and a few issues with the battery life. It is absolutely worth the price, even if you are being sold it at around 1,100 as similar laptops cost upwards of 1,500.
Single Review, online available, Short, Date: 02/14/2012