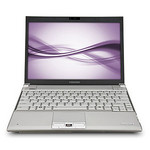 This business class laptop uses transflective LED screen tech. The laptop boasts the inclusion of a dual-core Intel processor and 3072MB of memory. The Toshiba Portégé R600-13Z impressed us almost across the board. It is expensive but, unlike the Sony, this is because it's packed with cutting-edge technology that provides great performance and usability.
Single Review, online available, Short, Date: 03/11/2010
Rating: Total score: 80%