Reviews for the HP Pavilion dm3-3110us

With a price tag of just under $600, the HP Pavilion dm3-3110us is certainly not going to be a high performance system. HP's Pavilion dm3-3110us is a mixed package. It certainly is affordable with prices easily found for under its $600 base price tag. It comes with a nice design and excellent keyboard. Bluetooth and eSATA are also standard which is uncommon for such a low priced laptop.
Single Review, online available, Short, Date: 02/28/2011
Rating: Total score: 60%

U5400: Entry level dual core CPU of the Arrandale series. Does not support Turbo Boost (for the CPU), Hyperthreading, Virtualization and AES. Due to the slow clock speed, the performance is only sufficient for non demanding applications.» Further information can be found in our Comparison of Mobile Processsors. 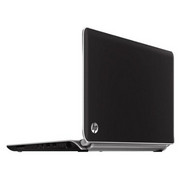