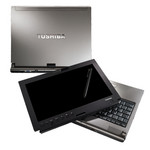 The Toshiba Portege M750 is for those who want regular notebook power and design plus a tablet screen. It fits equally well in vertical markets such as medical, insurance, etc. and on the college or work campus. The notebook is powerful enough for most productivity applications, multimedia tasks and some gaming. It has plenty of ports, and built-in Wi-Fi and Bluetooth make sure you are connected wirelessly. The optical drive also sets it apart from the ultra-thin tablet notebooks and the display is very good by tablet PC standards.
Single Review, online available, Long, Date: 07/01/2009
Rating: Total score: 70%
Toshiba - Portégé M750 review
Source: IT Reviews

There's plenty to like about the Portégé M750-10K: it's well-built, great to scribble notes on and has a reasonably fast processor. However, at just over £1,200 including VAT, it's also pretty expensive, so you need to be absolutely sure you'll make full use of its tablet features before parting with your cash. And although it's clearly aimed at business users, we were hoping for a slightly more stylish design.
Preis 40, Leistung 80, Verarbeitung 80
Single Review, online available, Short, Date: 05/26/2009
Rating: price: 40% performance: 80% workmanship: 80%
70% Toshiba Portégé M750
Source: Reg Hardware

Still alive yet often ridiculed, tablet PCs haven't exactly had the easiest of times since their conception at the turn of the century. HP is attempting to breathe new life into the tablet by aiming its new TouchSmart TX2 at home users, but Toshiba's Portégé M750 takes a more traditional business-oriented approach. At £1206 inc VAT, the Portégé M750-10K doesn't come cheap, and at this price we were hoping for a better chassis. If you want to save a bit of cash, the M750-10J variation costs the least at £976, but with an Intel T5870 processor and just 1GB Ram, it's not something we're be tempted by.
70, Preis 40
Single Review, online available, Long, Date: 04/15/2009
Rating: Total score: 70% price: 40%
80% Toshiba Portégé M750-10K review
Source: Techradar

The Toshiba Portégé M750-10K (£1233 inc. VAT) doesn't stray too far from the notion of what a Tablet PC should be and is clearly a machine designed for the businessman. The first thing you'll notice about this Tablet PC is how well made it is. The Toshiba Portégé M750-10K isn't the cheapest Tablet PC on the market, but it makes up for it with a great, if a little utilitarian, design, versatile performance and a highly usable battery life.
4 von 5, Leistung gut, Mobilität gut, Display schlecht
Single Review, , Length Unknown, Date: 01/28/2009
Rating: Total score: 80% performance: 80% display: 40% mobility: 80%

Middle class dual core CPU with a TDP of 25 Watt. For high end gamer the performance could be not sufficient (for class 1 graphic cards).