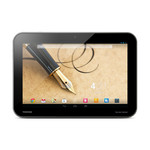 Reviews for the Toshiba Excite Write

The Toshiba Excite Write Tablet is a nice bit of kit, but in this crowded space it needs to be more than nice to stand out. At £450 without the keyboard case, it’s putting itself directly against the Samsung Galaxy Note 10.1 with its stylus and similar specs, and it’s a battle the Excite Write can’t quite win. The benchmarks and deeper stylus integration are both clear wins for the Note. If you dislike the Samsung UI, it’s a good alternative to the Note 10.1, but it won’t be most people’s first choice.
Single Review, online available, Long, Date: 11/22/2013
Rating: Total score: 70% price: 60% performance: 80% features: 80% display: 70% mobility: 80% workmanship: 70%
Toshiba Excite Write
Source: Engadget

On paper, the Excite Write comes off like a premium product loaded up with top-shelf specs that more than merits the $600 price tag. How it fares when it's actually in hand, however, is another matter. Turns out, Toshiba's asking price is more of a warning sign than a high-end designation.
Single Review, online available, Long, Date: 09/08/2013

If you're considering the Write for its bundled active digitizer pen, I'd recommend going with the Galaxy Note 10.1 instead. Samsung's TouchWiz may seem bloated to many, but the multitasking and built-in pen support are far better than what Toshiba offers. If you're more interested in getting a taste of Nvidia's Tegra 4 power, Toshiba makes the Excite Pro, which is essentially the Write sans pen support for $100 less. For now, the Apple iPad remains our top pick for large-screen tablets, for its tried-and true design and its superior collection of tablet apps.
Single Review, online available, Short, Date: 07/30/2013
Rating: Total score: 70%

The Toshiba Excite Write is one of the fastest machines in the market with its quad-core, 1.8 GHz, Nvidia Tegra 4 chip and 2GB of RAM. It also features a unique 2,560 x 1,600 IPS display which is MORE than full HD. This tablet's display is unbelievably sharp with crisp details unlike any other. As should be expected, graphics and gaming performance is extremely impressive, with smooth game play and fast load times. It easily handles switching between multiple tasks and apps, and web browsing is as very smooth. This device outperforms the competition in these aspects by far. Unfortunately, this is where the accolades end.

The Harman Kardon branded stereo speakers are placed where hands will cover it and the volume just is not high enough. Battery life is only decent, which is expected when considering the components. With its premium price, one would expect a premium feel. Unfortunately, the Toshiba Excite Write is disappointingly big and bulky, with a plastics feel. Let's turn to its main selling point: A stylus with active digitizer that features 1024 pressure points and what Toshiba calls a "pen and paper” feel. While it may draw attention - the sad fact is, apps that fully exploit both the potentially brilliant stylus and the high resolution just don’t exist yet.

The bottom line is that the Toshiba Excite Write features an exorbitant price, and all the impressive hardware just does not cut it. The recommendation is to wait for the next batch of Tegra 4 powered devices and apps to improve upon what Toshiba has attempted to achieve with the Excite Write.