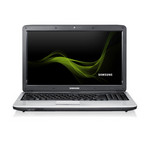 Reviews for the Samsung RV510-A04UK

We always have high hopes for Samsung laptops, but the RV510 unfortunately just doesn't quite deliver, thanks to its irritating keyboard and mouse and performance that is a little underwhelming.
Single Review, online available, Very Short, Date: 02/15/2011
Rating: Total score: 60%

T3500: The Celeron T3500 is a stripped down Pentium T4300 with fewer power saving mechanism (e.g. Enhanced Speedstep is missing). Therefore, the performance should be equal to the T4300 in the entry level segment. » Further information can be found in our Comparison of Mobile Processsors.