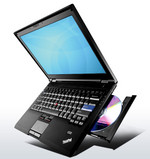 Reviews for the Lenovo ThinkPad L410

We can’t compare this laptop to the vast majority of others on the market today, which use Core i3 and i5 CPUs. It’s clear that ordinary consumers and well-heeled road warriors should stay away from this, but considering that this is the cheapest full-sized ThinkPad, businesses on an extremely tight budget might find it an attractive, utilitarian option.
Single Review, online available, Very Short, Date: 05/31/2011
Rating: Total score: 60%

Mid-range dual core processor with 3 MB level 3 cache and a TDP of 25 Watt.